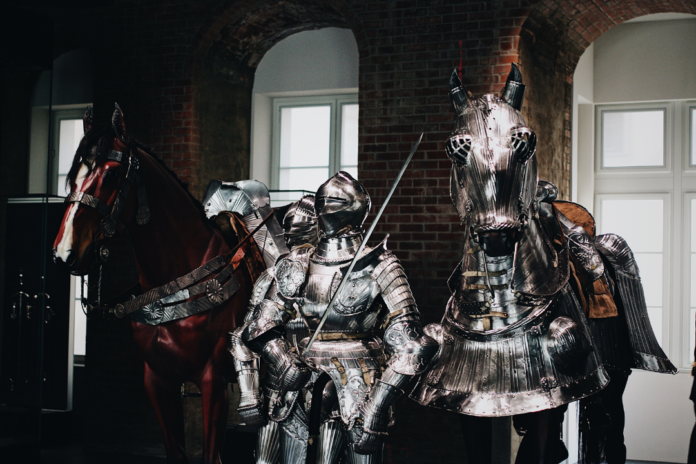 You’ll start the night in the Hall of Arms.  It’s open sixty minutes prior to show time, and you’re going to want to check this out to get the full experience.  The Hall of Arms if full of elaborate Medieval décor.  You’ll see coats of arms belonging to many prestigious families.  You’ll also get to see an amazing array of Medieval weaponry.  A highlight of this medieval village would have to be the Museum of Torture.  You get to see reproductions of torture instruments used during the Middle Ages.

Eventually, it will be time to make your way into the Grand Ceremonial Arena.  You’ll be seated in one of six color-coded sections.  Each section matches up to a Knight.  The Knights, riding on horseback, of course, compete with each other.  They compete in games of skill, like the ring pierce, javelin throw, and flag toss.  The competition culminates in the Realm for the Tournament Royal.  The knights compete in authentic jousting matches and dangerous sword fights.  You will root for your Knight to win!

But even if your Knight doesn’t win, you should have a really fun evening.  That’s because you will be dazzled by an amazing display of equestrian skills, Medieval pageantry, and special effects.

And since this is a dinner show, there will be dinner served, of course.  You get a four-course dinner in true Medieval fashion.  This means pre-silverware.  But you can get silverware upon request.

It should be a fun night for all.  This is a wonderful activity to add to your family vacation in Orlando, Florida.  It is conveniently located at 4510 W Vine St in Kissimmee, Florida.

Good news: I have a great coupon for you for Medieval Times!  Just click here and you can save $18 on your admission to Medieval Times.  This is a much better coupon than you can find on most websites.  So buy your ticket now and take advantage of this sale!

Clearwater/St. Petersburg Hotels for Under $100 a Night