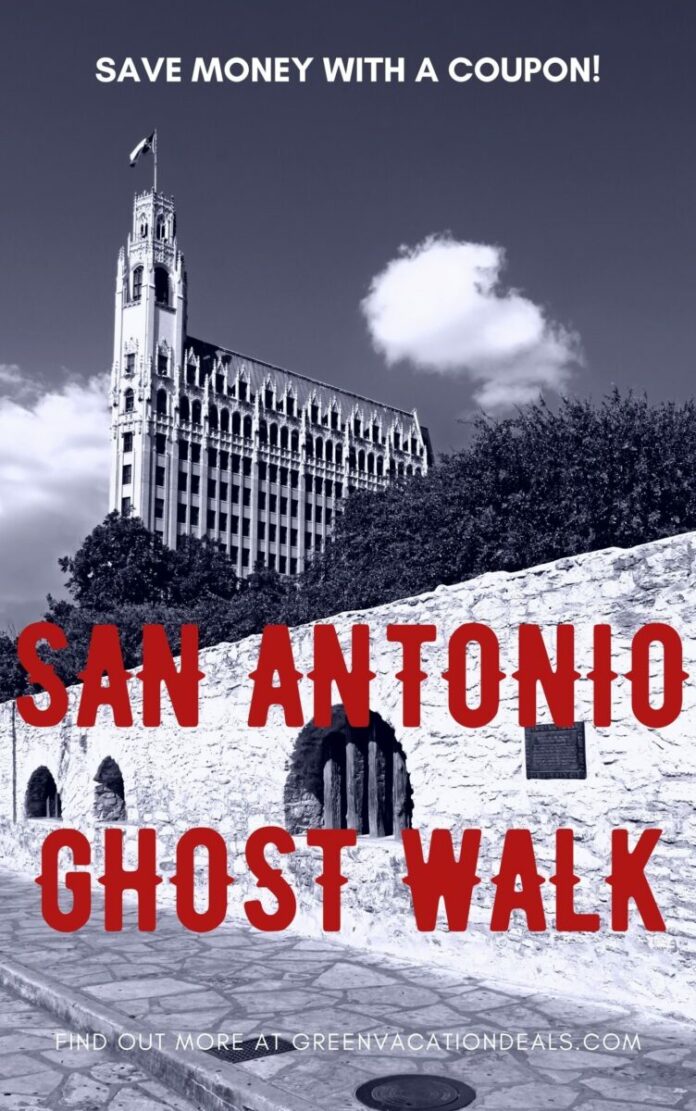 San Antonio was founded as a Spanish mission in 1718. Early settlers fought with two different Native American tribes. General Santa Anna and the Mexican Army defeated and killed all the Texas defenders in the Battle of the Alamo in 1836. While the United States won the Mexican American War, San Antonio paid a terrible price, losing two thirds of its residents.

During the years following the war, gun fighters and outlaws frequented the city. Butch Cassidy, the Sundance Kid and members of the Wild Bunch used a local brothel as their hideout.

Given the violent deaths and all the battles, it probably shouldn’t be surprising that the city has so much paranormal activity. Whatever the cause, San Antonio has an abundance of sad, eerie and absolutely frightening spectral encounters.

Take a fun walk packed with creepy history and spooky stories on the San Antonio Ghost Walk. This 90 minute walk explores the beautiful historic downtown of the city.

Stroll through the history laden grounds of the Alamo. Your guide will tell you about the battle in which 500 Mexican soldiers and 189 Texans were killed in 1836. Hear tales of the ghostly figures that roam the grounds at night.

You’ll see some of the hotels surrounding the Alamo. See The Emily Morgan Hotel which began its existence as a medical facility. There was a morgue in what is now the hotel lobby. The 14th floor was a crematorium. Hear stories of what is happening there today for which there are no reasonable explanations.

You’ll learn some local history along the way. Hear tales of San Antonio’s most infamous ghosts and the stories behind them. Your guide will share with you some of San Antonio’s rich and haunted history.

See the Menger Hotel and hear what happens when the sun goes down. The Menger Hotel Bar was where Theodore Roosevelt recruited men for his Rough Riders in 1898. Is it true that he liked the bar so much that he still can be seen there?

You’ll walk along the River Walk and enjoy its scenic beauty. You’ll see the hotel that started out as the Bexar County Jail. Public hangings were carried out there, the last hanging in 1926. Hear about the restless souls that roam the hotel at night.

Listen to tales of murder, suicides, dismemberment, battles, lost loves, betrayals, rituals, and more and hear about the frightening apparitions left behind by these events.

All the information you’ll receive is investigator verified with historical or paranormal evidence to back it up. Cameras are encouraged because all sorts of ghostly visages and unexplained anomalies are captured on these tours.

After the tour, you can enjoy a Haunted Happy Hour at the haunted Moses Rose’s Hideout. There are special Happy Hour prices. The adults can enjoy delicious libations and the kids can get snacks on this haunted ground.

The name Moses Rose is well known in Texas. Alamo legend has it that Colonel William B. Travis drew a line in the dirt in the Alamo. He issued the order to cross the line and join him against the Mexican Army or leave. Every one of the defenders crossed the line and fought for Texas to the end. Another version of the legend has it that one man chose not to cross the line and left the Alamo. His name was Moses Rose. There are some who question the accuracy of this legend.

Looking for a coupon to help you save money on this San Antonio ghost tour?  Well, good news!  You can save $21-$50 if you click here.  No promo code is even needed!