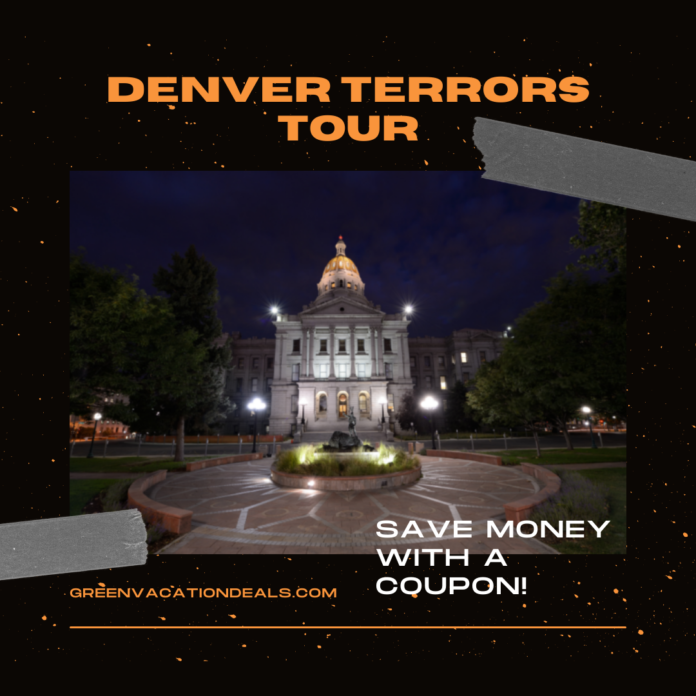 Denver was first populated in the mid 1800s by prospectors who came west to find gold. Gamblers, saloonkeepers and prostitutes followed. Fires, floods and battles with the Arapaho tribe marked Denver’s early years. The city was a rough and tumble pioneer town. Given the early violence and tragic deaths, it shouldn’t be surprising that so many lost souls roam the streets at night.

Learn about the city’s macabre history in a one-hour walking tour. Hear about the grizzly events and see the haunted sites. Your guide will give you insight into the history, character and events of Denver’s fascinating past.

Hear about the Fathers Day Massacre at the Wells Fargo Centre when four men were murdered. Many have claimed to see the apparitions of these men in the bank’s vault and the basement.

You’ll see the Colorado State Capitol which has had its share of ghost sightings. The Espinosa brothers went on a murder spree. They were finally killed and beheaded. Their heads were brought to the Capitol as proof to collect the bounty. Since then, numerous people have reported seeing their heads floating in the Capitol after dark.

The Croke Patterson Campbell House has a long history of paranormal activity. Unexplained happenings on the third floor led to the installation of two guard dogs. The dogs were found dead on the sidewalk. They had either jumped through a third floor window or had been thrown out the window. Today, the house is The Patterson Inn. Click here if you’d like to check it out for yourself.

Cheesman Park is a beautiful open green space. It was first a cemetery. The city decided they wanted to use the space as a park. The undertaker hired to move the bodies botched the job. It is estimated that over 2,000 bodies have been left buried under the park.

Cheesman Park is recognized as one of the most haunted places in Colorado. Numerous ghostly encounters have been reported in the park. Ghost sightings have occurred in many of the houses near the park and at the nearby Denver Botanic Gardens. “The Changeling,” a horror movie, was inspired by the paranormal activity the writer experienced while living in a home bordering the park.

You’ll walk down “Millionaires Row” in the Capitol Hill neighborhood. See the Peabody Whitehead Mansion which was featured on an episode of the television show, “Ghost Adventures.” Evidence of paranormal activity was found in the mansion, especially in the basement where a young woman hanged herself many years ago.

You’ll see the Sheedy Mansion and the Molly Brown House Museum, both of which are reputed to be haunted. Hear tales of depravity and death at the Newhouse Hotel and tales of the hauntings at the hotel today. Click here if you’d like to check this out for yourself.

This is a fun way to learn about the history of Denver and it is educational as well as entertaining. Book this through Viator to get the best available price.

Save on Wine, Cheese & Chocolate Valentine’s Day Cruise in San...