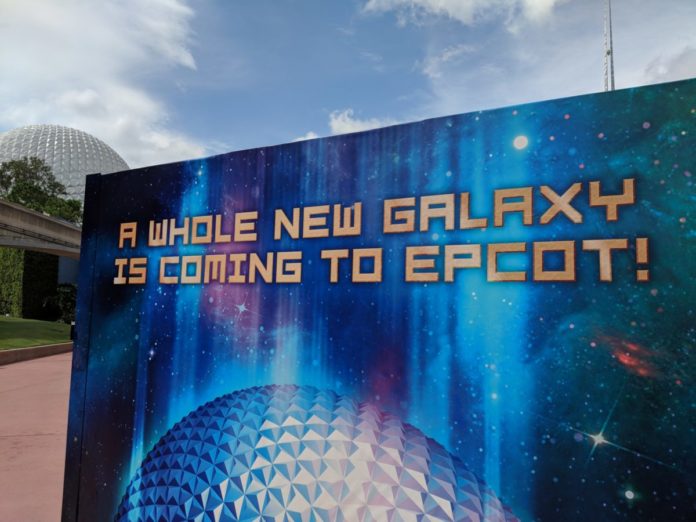 I go to Walt Disney World in Orlando, Florida a lot.  Part of the reason why it never gets old to me is that Disney is always creating new attractions.  Whenever Disney comes out with something new, I always want to be there!  So you can imagine how excited I was recently that Disney announced more new attractions coming to the Disney World theme parks.  And this is in addition to the new attractions that I was already looking forward to!

So we wanted to give you guys a heads up about the fifteen attractions that haven’t debuted yet at Disney World.  They will be up and running over the next couple of years, which will be so exciting!

So I was really surprised when it was announced at the recent D23 Expo that Disney World is about to get a new Mary Poppins attraction!  I had heard rumors, but didn’t know they’d actually come to fruition.

This new attraction will (fittingly) be added to the United Kingdom Pavilion at the EPCOT theme park.  All we really know is that guests will able to enter Number 17 (a.k.a. the Banks family’s home).  We’ll let you know when we know more!

I absolutely loved Disney’s recent animated hit, Moana, so I am so excited they are basing an attraction on this!

This will be located in the World Nature part of EPCOT.  So if you’ve been to EPCOT before you might be thinking, what is World Nature?  How did I miss that?  Well, you probably didn’t.  World Nature is just what Disney is now calling the Living with the Seas and The Land pavilions.  Which makes sense, given that both of those pavilions deal with nature.

So this will be a walkthrough attraction that (fittingly, given the movie) involve water elements.  So this means waterfalls, jumping water and dancing fountains.  This is definitely one you’re going to want to walk by in the summer!  EPCOT can get super hot in the summer (but you can stay cool by reading our tips).

So you know how a lot of people go to theme parks for the roller coaster?  Those people can find EPCOT disappointing since they don’t exactly have thrill ride after thrill ride.  But roller coaster fans will be happy to know that EPCOT is getting a new roller coaster. This roller coaster is called Guardians of the Galaxy: Cosmic Rewind.  As you probably guessed, it is based on the Guardians of the Galaxy movies.  And, as I said before, it’s a roller coaster.  And not just any roller coaster.  In fact, it is the first Disney ride to feature a reverse launch!  And for those of us who like the storytelling aspect of Disney rides and not just straight thrill rides, don’t worry.  It’s actually being called a “story rollercoaster”.  You’ll be able to follow along with the story and see the action during the ride.  And you’ll be able to do that because of the brand new technology used.  This technology allows the vehicles to rotate 360 degrees.  So this ride is not only great for rollercoaster fans, but for Guardians of the Galaxy & Marvel fans, too.

Another new ride coming to Epcot (they’re getting some of the best rides, right?) is Remy’s Ratatouille Adventure.  If you’ve ever been to Disneyland Paris, you may think Remy’s Ratatouille Adventure sounds familiar.  And you would be right since this attraction is based off the original ride that’s in Disneyland Paris.  The basic storyline is the same in both rides.  And that storyline is that you will be shrunk to the size of Chef Remy and travel through Gusteau’s restaurant.  It also will use a trackless ride system, similar to Antarctica Empire of the Penguin ride over at SeaWorld Orlando.

5. Star Wars: Rise of the Resistance

So, the highly anticipated Star Wars: Galaxy’s Edge land at Hollywood Studios just opened.  If you’ve been, you may have noticed there’s only ride there.  But all of that will change soon when the Star Wars: Rise of the Resistance ride opens.  It looks like it’s going to be one of those classic Disney dark rides where you really feel like you’ve stepped into the story.  It is being billed as a thrill ride with small drops.

I’ve made no secret of the fact that I did not approve of Disney closing The Great Movie Ride!  I still miss it every time I visit Hollywood Studios.  But I’ll try not to hold it against the ride that will take its place in Hollywood Studios.

This ride is Mickey & Minnie’s Runaway Railway, and it will be opening soon.  It is (quite bizarrely, honestly) the first ride to be centered at the Disney parks around Mickey Mouse & friends.  It is based on Mickey Mouse cartoon shorts and should be great for the whole family.  Which is good, since I personally think as of right now, Hollywood Studios is a bit lacking for truly child-friendly attractions.

Remy’s Ratatouille Adventure is not the only ride coming to Disney World that first debuted across the world.  Tron Lightcycle Power Run is a roller coaster that originally debuted at Shanghai Disneyland.  It is based on the Tron series and is a semi-enclosed launched steel roller coaster.

Tron Lightcycle Power Run will be added to Tomorrowland at Magic Kingdom, which I think is a perfect fit.  And it’s really exciting because now Magic Kingdom will have more thrill rides!

Disney is touting HarmonioUS as the largest nighttime spectacular ever created for a Disney park.  There will be massive set pieces, lasers, lights, moving fountains, and pyrotechnics.  And that is, of course, in addition to the fireworks!

One of my favorite parts of Disney fireworks shows are the soundtracks because I love music.  And I kind of think I am going to love this soundtrack.  It will consist of favorite Disney songs (yay!) reinterpreted by a diverse group of artists from around the world (double yay!).

So coming to its place will be Awesome Planet.  It will be debuting in January 2020.  It promises to showcase the beauty & diversity of the planet.  Which certainly sounds in keeping with the Land Pavilion, and the World of Nature theming!

When I first heard that a Beauty and the Beast Sing-Along was coming to the France Pavilion in EPCOT, I was a bit worried.  I really like the Impressions de France film and I did not want that to close.  But then I was excited when I found out that instead of replacing it, they will share the space!

The new Beauty and the Beast Sing-Along should be amazing, too.  I mean, first of all, you have the music, which is some of Disney’s best.  And then it’s going to be directed by Don Hahn  He was a producer of both the animated & live-action versions.

Similarly to the France film, I enjoy the film in the Canada Pavilion.  But they are so much replacing it as improving it.  There will be new scenes and a new story.

Are you detecting a theme here?  I liked the film that was already in China.  But as technology advances, I like to see enhancements and improvements, too.  And Wondrous China was filmed and will be presented in a completely seamless 360-degree digital format.  And that’s going to be awesome!

EPCOT will be getting a brand new pavilion: the PLAY! pavilion!  It will be opening in time for the 50th anniversary, and it sounds like it will be classic Disney!  It’s not just a play area but an interactive city full of experiences, games, and activities.  You’ll be able to interact with favorite Disney characters, both real and virtual.

Here are a couple of highlights:

Space 220 will be in the Mission: SPACE part of EPCOT.  As the name implies, it is space-themed – and is a real experience rather than just a restaurant (like Rainforest Cafe over at Animal Kingdom).

When you arrive, you will board a special elevator.  This is because you will “journey” to a space station – that just happens to also be an amazing restaurant!  During your elevator ride, viewports will even give you a real-time perspective.  And during your meal, you can enjoy panoramic daytime and nighttime views of Earth from 220 miles up.  This is definitely a restaurant that (sorry, I had to) is out of this world!

This new dining experience is called La Crêperie de Paris.  It will consist of both table-service and quick-service options.  The menu comes from celebrity chef Jérôme Bocuse, so you know it is going to be good!

So I know seeing all of this will make you want to start planning a trip to Walt Disney World!  Before you do, let’s give you some help on how to get a good deal.

We recommend using this website to get the lowest price for Disney World tickets.

If you are planning on flying to Disney World, here are our tips on how to save money on airfare to Orlando.

If you want to stay on-site at a deluxe Disney hotel, then we recommend using David’s Vacation Club Rentals.  You’ll pay prices that can actually be cheaper than some of Disney’s moderate or even value hotels.  Here’s a video explaining the process.

85 Reasons Why Mickey’s Very Merry Christmas Party is Worth The...