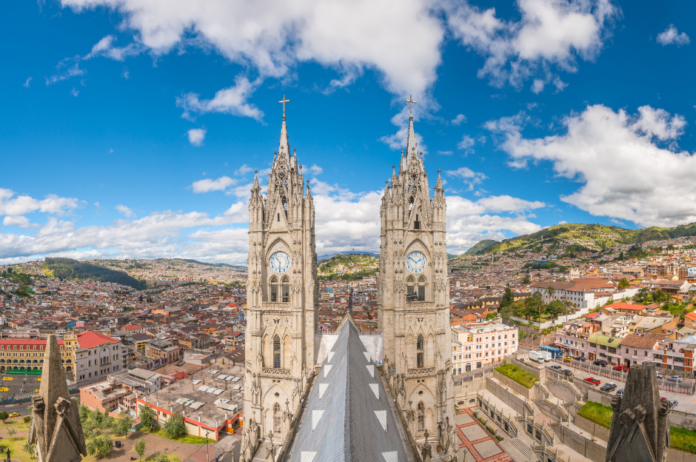 Ecuador’s capital, Quito, is the second tallest capital in the world. It sits high at an altitude of 2,850 meters (9,350 feet) on the slopes of the Pichincha volcano.

The oldest of all South American capitals, Quito’s well preserved old town was designated a UNESCO World Heritage site in 1978, the first city in the world to be designated as such. The city is rich in 16th and 17th century churches and other structures blending European, Moorish and indigenous styles.

This metropolis in the mountains is a fascinating mix of old meets new. Historic alleyways and baroque buildings have modern skyscrapers as their backdrop.

Quito is one of the largest cities in the world to lie right next to the equator. While in Quito, you could have the opportunity to visit the equator line. It is half way between the North Pole and the South Pole at 0 degrees latitude. You can walk on the equator that divides the planet into a Northern Hemisphere and a Southern Hemisphere on a Mitad del Mundo tour.

There’s so much to do in and around Quito. Explore the Amazon rainforest or take a tour to the beautiful Quilotoa volcano and the lagoon inside the volcano.

See the sights of the city on a tour and then take a ride on a cable car up to 12,500 above sea level with absolutely unforgettable views of the city.

If you’d like to go to Quito, right now would be a good time. Quite a few hotels have discounted their rates.  All the following hotels were rated a 7, 8, or 9 on a scale of 1 to 10. And every one of these hotels can be booked now for under $100 a night. Just act quickly because these deals are too good to last very long.  You can click here to take advantage of these cheap rates.

Win A Trip To A Bowl Game

Win A Free Disney Cruise Trip To The Bahamas

Win a Trip to Japan