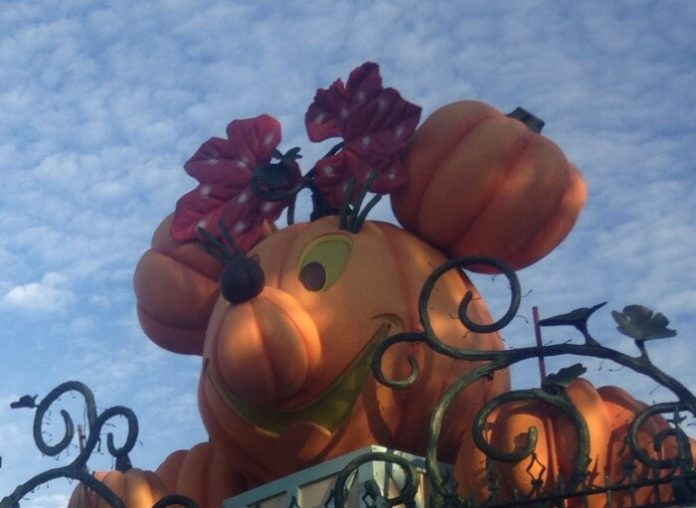 Looking to celebrate Halloween in Disneyland Paris this year?

You’ll love all that Disneyland Paris has in store with Disney’s Halloween Festival!

This year, the Halloween season lasts from 28th September to 3rd November 2019.

Let’s take a look at all the fun events that’s part of Disney’s Halloween Festival. Find out fun things to do during the Halloween season in Disneyland Paris!


Be sure to catch Mickey Mouse on his fabulous Phantom Manor float! Plus, his fellow Disney characters will be on hand, and in wonderful autumn attire.

This year, you can enjoy a brand new show with the Disney villains starring Ursula from The Little Mermaid!

The Disney villain show isn’t the only opportunity to mingle with a villain. Maleficent herself will cast a spell on the the courtyard of Sleeping Beauty Castle and change it into a huge briar bush – and, of course, will also be on hand for pictures! Looking for some not as scary Disney characters to celebrate Halloween with?

Other character encounters during the Halloween season include:

Make sure you get a map and programme at the entrance to the Disney Parks so you’ll know when and where you can meet such characters.  You’ll love seeing their fun Halloween costumes!

Okay, so this new attraction isn’t new, but it is reopening after a major refurbishment!

The Phantom Manor attraction was closed for most of 2018 and the beginning of 2019, but it has now fully reopened. During the renovation, several changes were made to make the ride even more mysterious. And with Halloween approaching, now is the perfect time to experience these changes!

The Twilight Zone Tower of Terror

This is another Disneyland Paris attraction that’s recently been closed for renovations. The Twilight Zone Tower of Terror will actually reopen on the same day that the Halloween Festival begins!  If you enjoy thrills and chills, then you’ll definitely want to experience the new version of this ride!

Luckily, you can also enjoy the Tower of Terror and Phantom Manor even after the Halloween Festival is over.


However, all the other Halloween fun won’t stick around, so you’ll definitely want to visit before 3rd November 2019.

You can click here to find out how to get the best prices for Disneyland Paris tickets.

And if you’re going to be in town on Halloween itself (31st October 2019) or on 26th October 2019, you can find out about Disney’s Halloween Party here.