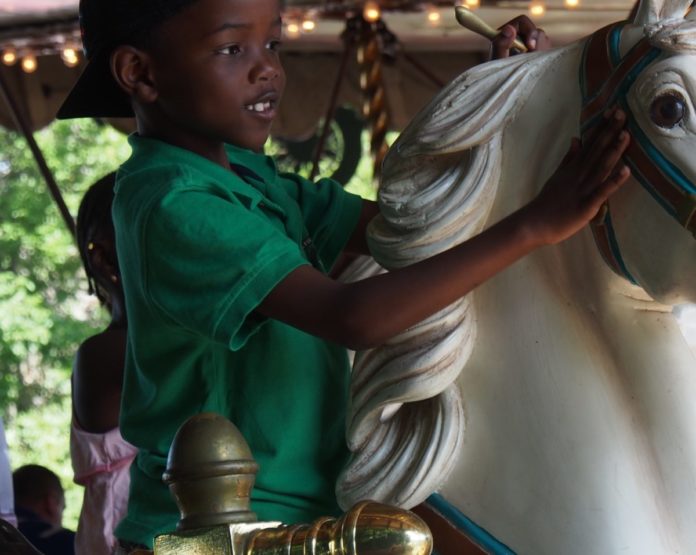 Quassy Amusement Park originally debuted in Middlebury, Connecticut as a trolley park back in 1908.  It has since become a huge source of entertainment in Connecticut for over 100 years.  Quassy Amusement Park is now a full-fledged amusement park and water park.  Today, we’ll go over all the great attractions available at the park and how you can save money on tickets.

Quassy Express Train first debuted at Quassy Amusement Park back in 1948, and has been a huge success ever since.  The miniature locomotives and coaches ride around a half-mile track in the Great Lawn area of the park.  Along the way, you’ll go through a covered, dark tunnel.  You will also ride directly underneath the Wooden Warrior roller coaster during this train ride.  It’s just a really great experience you are going to want to have!

Reverse Time is the first of its kind in all of North America.  It debuted in 2016 and is the newest thrill ride at Quassy Amusement Park.  You will spin, dip and dive while you face outwards on this circular ride.   This ride is really cool at night, with LED lighting at the top and bottom.

FRANTIC was the first ride of its kind in all of New England when it debuted in 2015.  You’ll spin and flip high above the park in this thrill ride.

How could you have an amusement park without a carousel?  Luckily, Quassy Amusement Park has a Carousel.  Not only do they have a Carousel, too, but they have a great one.  It is a 50-foot carousel with a wood platform, suspended ceiling and hundreds of lights.  There are a lot of animals including “jumping” horses.  And while it may have debuted at the park in 1990, it operates in a 1927 roadhouse, so there is a lot of history there.

This was ride became part of Quassy Amusement Park in 1952, and it’s still a hit today!  Kids love riding their boats in a circular motion.

Jet Fighters also become part of Quassy Amusement Park back in 1952.  Here, children are lifted in the air and fly in a circle.  They sit in two-seat jet fighters.  Kids love the buzzers on the fighter plane guns!

Little Dipper is another ride that debuted in the original Kiddieland back in 1952.  It is a great roller coaster that kids can ride.

Here’s a helicopter ride that you have control over!  Pull back, and your helicopter will take flight.  But if you push forward, you’ll land!  Adults can ride with kids on this ride.  It debuted at Quassy Amusement Park in 1958.

Yo-Yo Swing debuted at Quassy Amusement Park back in 1972 and guest have had a swinging time on this ride ever since!  You’ll sit on one of the 32 seats on the ride and you’re lifted off the ground as the Yo-Yo spreads its “wings”.  The ride then rotates and tilts, resulting in a thrilling experience!

Free Fall’N is a 12-seat gondola ride that is lifted to the top of a tower.  Suddenly, without notice, the ride will drop!  Free Fall’N first debuted at Quassy Amusement Park back in 2010.

Those who love whitewater rafting will love Big Flush Water Coaster!  It’s a two-person raft ride where you’ll plunge into darkness, twist and turn, and then emerge on the run-out landing.  You’ll get wet along the way, but luckily not soaked.  This ride first debuted at Quassy Amusement Park in 1999.

Embrace your inner pirate as you set sail on this great ride.  You’ll experience near weightlessness when the ride swings like a huge pendulum.  The Galleon Pirate Ship first debuted at Quassy Amusement Park back in 2008.

The Paratrooper is a classic theme park ride consisting of ten suspended seats.  They spin up to speed before the entire ride gets lifted high above the park.  Paratrooper first debuted at Quassy Park in 1997.

The Crazy Cups ride consists of six beautiful gigantic sea cups that spin around a rotating platform.  You and your fellow cup riders will be able to control how fast it goes.  Since this ride debuted in 2012, it has been a huge hit with families visiting Quassy Amusement Park.

Skipper’s Clippers is an interactive pirate ship ride and is one of the newer rides, having debuted in 2017.  You’ll get to soar above the amusement park lakeside, which gives you great views.

You’ll spin around and around on this classic family ride.  Tilt-A-Whirl first debuted at Quassy Amusement Park back in 9177.

Kids love riding the Frog Hopper ride, which opened in 2000.  Children get lifted up a 16-foot tower and then they’ll be lowered in gentle but quick drops.

Music Fest consists of 18 two-passenger rides that quickly move around in a circle.  The cars swing out as the ride accelerates while there are hundreds of flashing lights.  Music Fest first debuted in 1991.

This balloon ride first debuted at Quassy Amusement Park in 2017 and has been a big hit with children and the adults who ride with them.  You’ll spin around in your own balloon on this interactive ride.

The JLGH Bumper Cars first debuted at Quassy Amusement Park back in 1979.  Guests have loved colliding with other cars ever since!

Kiddie Bumper Cars was a fun addition to Quassy Amusement Park back in 2015.  It’s a smaller version of the adult bumper car ride.

The Giant Slide, as the name implies, is a really big single-lane slide.  It first debuted at Quassy Amusement Park back in 1975.

Bouncing Buggies is the newest ride at Quassy Amusement Park, having debuted this past year.  You can ride with your child on this fun ride.

Saturation Station was the first waterpark ride at Quassy Amusement Park.  It was also the first WaterColors/ SCS Interactive modular play unit in the world.  Saturation Station is a great way to stay cool in the summer.   There are water cannons, cascading fountains, and 2 slides.  And oh yeah, there is that gigantic tipping bucket that dumps more than 300 gallons of water.

Tunnel Twisters was added in 2006, and now people can’t imagine the park without them!  They are huge two water slides where you’ll get a different experience depending on the slide you are on.  The red slide is enclosed and when you slide down the red slide you’ll be in darkness.  It is perfect if you like your rides to be as scary as possible.  The yellow slide, on the other hand, is translucent and is perfect if you don’t want to slide in complete darkness.

This fun raft ride opened in 2013.  You’ll begin the ride by plunging through a dark tunnel.  You come out of that in a huge bowl.  Your raft will spin along the wall of the basin.  You’ll then drop through the center and come out through a runoff trough.

Another great ride that opened in 2013 was FreeFALL Extreme Bodyslides.  These are fast bodyslides that plunge from a tower that overlooks Lake Quassapaug.  A neat thing about this ride is that it actually dips under the BulletBowl raft ride, which is exciting.

Quassy Amusement Park didn’t just add wilder rides in 2013; also added was Fish Pond.  Fish Pond is just for little kids (parents can watch, but older kids are not allowed to play here).  Fun but tamer features make up the Vortex Aquatic Structures Splashpad area.  There are interactive attractions such as the rainbow spray.

Another attraction just for children was added to Quassy Amusement Park in 2016, and that is Slide City.  Slide City is a great complex for children who are not big enough for the larger slides but still want in on the fun!  It consists of five exciting smaller waterslides.

Looking for coupons for Quassy Amusement Park?  Then you’ve definitely come to the right place.  Click here to see how you can save up to 33%.