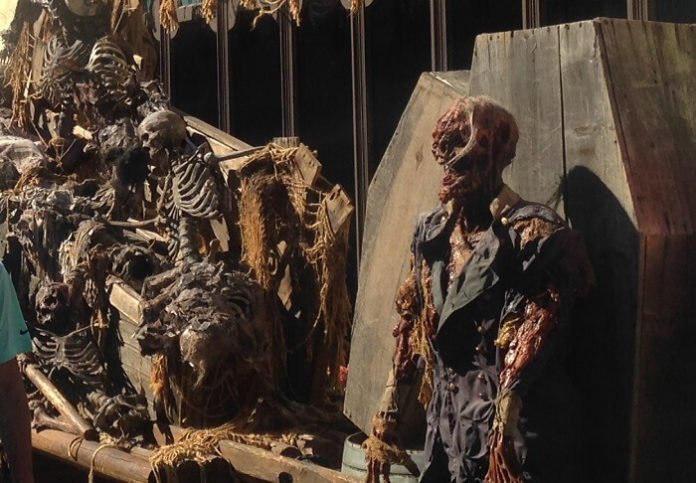 Universal Studios Hollywood is a lot of fun any time of the year, and they have a lot of great events.  But perhaps their most famous and beloved event takes place during the fall every year.  And that event is Halloween Horror Nights.  It is a wonderful chance to be scared out of your mind by your favorite horror movie characters.

Halloween Horror Nights at Universal Studios Hollywood is great every year, and 2022 should be no different.  After all, they have eight haunted houses, scare zones, a live show, the Terror Tram, and more.

I’m going to tell you about all the great attractions at Halloween Horror Nights this year.  And then I’ll tell you how you can save money with a coupon!

The classic horror franchise Halloween deserves its own haunted house, don’t you think?  This year, you get to walk into the original 1978 classic horror movie.  Yes, you’re back in Haddonfield, Illinois where Michael Myers is about to embark on his first brutal spree – except this time, you’ll be right there!

The Weeknd: After Hours Nightmare

The Horrors Of Blumhouse

If you love Blumhouse horror movies, then you’ll love this double feature of a haunted house.  First, find yourself trapped between a teen and a serial killer who switched bodies in Freaky.  Then you’ll try to escape the dark basement of The Grabber in The Black Phone.

Dracula.  The Mummy.  The Wolf Man.  Just one of these monsters should be enough to terrify you.  But now they are uniting to find an amulet that will break their curse…and they plan to destroy anything or anyone who could get in their way.

Killer Klowns From Outer Space may have been a comedy horror movie.  But you won’t be laughing when you try to avoid being trapped in the Klowns’ cotton candy cocoons.

The setting of this haunted house is that you are at a 1920s Hollywood hotel.  It was once the hunting ground of an infamous serial killer that just happened to be the hotel’s owner.  Now, it’s been turned into a modern-day haunted hotel, because he is back from the dead!

You might think that the story of the woman who drowned her children and herself was a childhood fable.  But it’s not, and she’s back in this terrifying haunted house.

This all-new haunted house is set in an abandoned Depression-era farm where scarecrows want to avenge the ravaged land.

The popular Terror Tram is back this year!

So what is the terror tram?  Well, have you ever taken the backlot tour at Universal Studios Hollywood where see movie sets?  Well, this is a tram tour out of your nightmares!

This year, you get to experience “Hollywood Harry’s Halloween”.  This is a spectacle with a terrifying cast of characters.  This part takes you past the iconic Psycho House and then through Steven Spielberg’s War of the Worlds set.

But that’s not all.  You also get to walk through the Jupiter’s Claim set from the new Jordan Peele movie, NOPE.  There you’ll see frightening characters from another classic Jordan Peele horror movie, the Tethered from Us.

Throughout the streets of Universal Studios Hollywood, you’ll encounter ghoulish creatures. They’ll pop up when you least expect it.

Think you’re clear of all horror once you exit the La Llorona: The Weeping Woman haunted house?  Think again, because other supernatural characters from Latin America’s most terrifying myths.

The New York Street part of Universal Studios will be transformed into a battle zone where workers and performers from a carnival sideshow are out for blood.

Can you try to escape a demonic group of clowns who seek to terrorize you with a chainsaw as you leave the theme park?

For the first time ever, the Dark Lord’s devoted followers (the Death Eaters) will be roaming Hogsmeade Village, looking for others to pledge their loyalty to Voldemort.

You can ride some of your favorite rides at Universal Studios during the night.  This includes:

At some dining locations throughout Universal Studios, you can find specialty drinks and food themed to the 2022 haunted houses.

Looking for a coupon code to help you save money on Halloween Horror Nights at Universal Studios Hollywood tickets?  I can get you something even better!

All you have to do is click here.  Then you can save up to 36% on your ticket.  The discount is automatic, so no coupon code or promo code is even needed!

Savings on Renaissance Orlando At SeaWorld