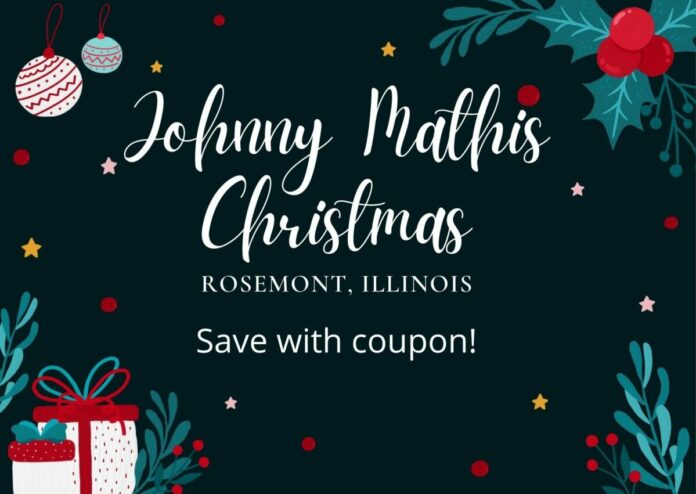 Legendary singer Johnny Mathis is celebrating his 65th year in the music industry. He first hit the Billboard pop chart in 1957 with “Wonderful Wonderful” and “It’s Not For Me To Say.” Following these hits was the monumental hit single, “Chances Are” which became his first Number One hit. These were followed by “Misty,” “Too Much, Too Little, Too Late,” “The Twelfth Of Never,” and so many more.

“There are a number of good singers, a smaller handful of truly great singers and then there is Johnny Mathis.” Barbra Streisand

Johnny Mathis’ record sales have exceeded 360 million worldwide. He was the third biggest selling artist of the 20th century after Elvis Presley and Frank Sinatra.

Johnny Mathis’ career has spanned generations with his smooth vocals. He has been described as having the voice of an angel. He has performed for heads of state around the world. Awards received include

“Christmas is very special for me. There were 7 of us growing up and my mom and dad always made it such a wonderful magical time.” Johnny Mathis

The holiday season wouldn’t be the same without Johnny Mathis. He’s recorded six Christmas albums. These have made him known as the “Voice of Christmas.”

“Christmas for me is the most enjoyable aspect of what I do.” Johnny Mathis

Johnny Mathis is coming to the Rosemont Theatre as part of his A Johnny Mathis Christmas tour. He’ll perform his greatest Christmas hits and his personal favorites. This is happening on Saturday, December 11, 2021, at 8 pm.

Rosemont, Illinois, is within 6 miles of Franklin Park, Des Plaines, Northlake, Morton Grove and Elmwood Park. Rosemont is 14 miles from Chicago and 73 miles from Milwaukee.

Are you looking for a way to save money on this Christmas concert? Click here and you can save $34 (36% discount) on each ticket.