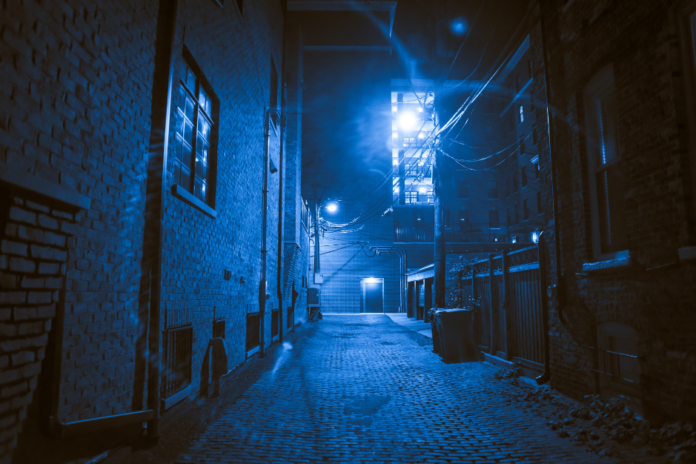 Chicago has a long history with much of it unfortunate and dark.  It is the home of the first serial killer, H.H. Holmes.  Chicago is the site of the Fort Dearborn Massacre, the Great Fire of 1871, the Iroquois Theater fire, the Eastland Disaster, and more.  Given all these tragedies, it’s not surprising that so many lost souls are restless and still roam the streets at night.

Learn about Chicago’s eerie history as you glide through the city on a Segway.  You’ll get a brief orientation and get familiar with your personal 2 wheeled self-balancing scooter.  And then you’re off to see the ghostly sites and hear the spooky tales as you zoom around Chicago.

Fort Dearborn is one of the most historic sites in Chicago.   At the beginning of the War Of 1812, the occupants of Fort Dearborn were ordered to evacuate.  Native Americans of the Potawatomi tribe ambushed them and 86 were killed.  The fighting was horrific and this became known as the Massacre of Fort Dearborn.  The fort was burned to the ground.

The fort was rebuilt on that site but parts were destroyed in various fires.  The Great Chicago Fire of 1871 destroyed the remaining buildings.  In 1980, construction in the area found many human bones believed to be the remains of the massacre victims.  These remains were reburied elsewhere.

The Iroquois Theater opened in 1903 and was declared to be “fireproof.”  On December 30, 1903, a fire broke out backstage.  All 30 fire exits were locked.  More than 600 people were killed.  It was the deadliest theater fire in U.S. history.

Many of the bodies of those who were so terribly burned were piled in the alley behind the theater.  Today, that alley is known as “Death Alley.”

People have said they feel a sense of doom or depression when walking down the alley.  Others relate feeling a very strong presence in the alley.

There have been many reports of strange human-like shadows zipping across the walls.  A number of pictures taken in the alley have shown apparitions in human form.  And there have been countless reports of hearing a child crying.  It’s also several degrees cooler in the alley than the surrounding area.

In July, 1915, The SS Eastland was an excursion boat that took people across Lake Michigan to Muncie, Indiana.  The ship was docked at Clark Street Bridge.  It rolled over into the river at the wharf’s edge.  More than 2,500 passengers and crew were on board that day and 844 people lost their lives.  This is the greatest single loss of life on any ship on the Great Lakes.

The hundreds of bodies that were recovered were taken to the National Guard Armory which was turned into a temporary morgue.  The wailing, moaning, and weeping of those left behind were heard for days.  30 women were treated for exhaustion and hysteria in the days following the disaster.

The Armory was sold and used for many things, being finally purchased by Harpo Studios, the production company owned by Oprah Winfrey.  Many staff members, security guards, and maintenance workers have reported seeing a woman who walked the halls in a long, gray dress and whenever approached, she just disappeared.  Staff members have also reported hearing whispers, crying, moaning and phantom footsteps.  Doors opened and closed by themselves.

The site on the river has produced strange stories to this day.  People have reported hearing splashing but when they look no one is there.  Moaning, pleas for help, crying, and screams have been heard.  Others have reported seeing apparitions of people flailing about in the water.

Several times people have called 911 for help.  One man jumped into the water to save someone he thought was drowning.  He discovered he was alone in the water.  He had no explanation for what he had seen other than saying it might have been a ghost.

You’ll hear about Al Capone, his haunted yacht and his sightings at the Congress Plaza Hotel.  Learn about Chicago’s infamous gangster murders.  And learn that there are some very good reasons to be afraid of the dark.

Save on Memorial Day Weekend Cruises