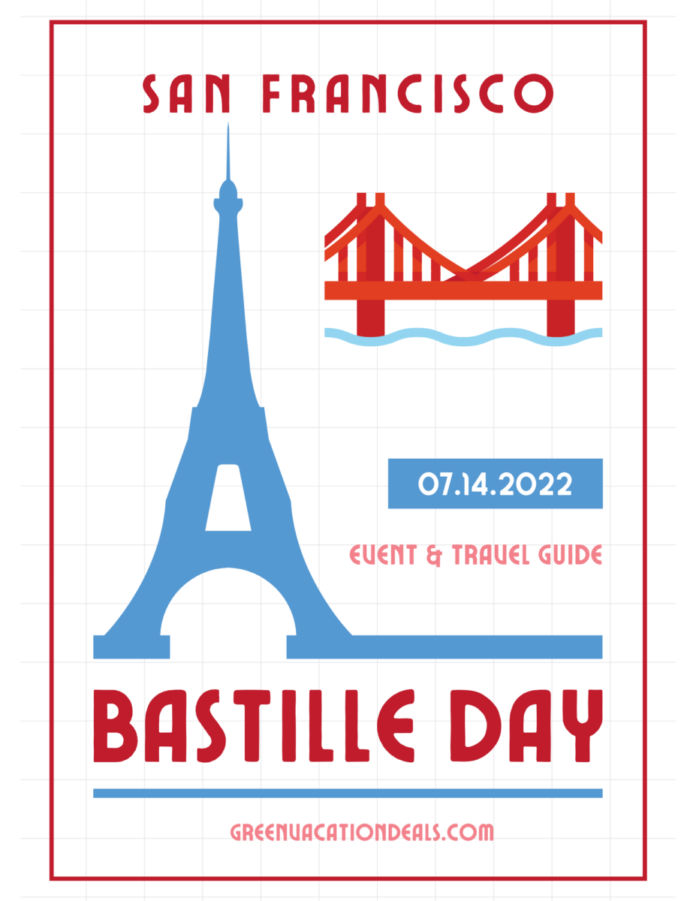 Bastille Day in France is July 14. In the same month and similar to our 4th of July, the holiday celebrates the overthrow of the monarchy and the start of the French Revolution and democracy in France. It is celebrated throughout the country, with the largest celebration in Paris.

From its earliest days, the French have had a presence in San Francisco. In 1849, gold was discovered at Sutter’s Mill. Tens of thousands of people from all around the world came to San Francisco hoping to strike it rich.

As early as 1850, French immigrants were operating stores and hotels in the old business section. The first French Consul came to San Francisco in that year. In 1852, a French newspaper, L’Echo Pacifique, began publication. The first Bastille Day celebration took place in July, 1880.

The French population in the San Francisco Bay Area is still a significant part of the Bay Area’s economy and life. San Francisco celebrates Bastille Day each year on the third Saturday in July. It honors French culture and cuisine.

Here are some of the 2022 celebrations.

Celebrate Bastille Day on July 14, 2022, from 5 pm to 9:30 pm with live music, French dishes and free berets at Bastille on Belden.  Bolden Place was once the home of Frenchmen during the Gold Rush. Find out why San Francisco was once called the “Paris of the West.”

Post Bastille Day Dance Party at Rickshaw Stop with doors opening at 9pm on Saturday, July 16, 2022 Celebrate Bastille Day with the best in 69s French pop. There will be fun drink specials and groovy French videos. DJs Brother Grimm and Pink Frankenstein will be there. Shagadelic attire is encouraged.

The 4th annual San Francisco Bastille Day Festival will be held on Saturday, July 11, 2022, from 11 am to 6:30 pm at the Embarcadero Plaza. It is a kernesse (outdoor festival) that features French food, French products, artists, a variety of wines and Kronebourg beer along with live entertainment.

Tours of the city’s French Quarter are offered and you can see the influence France has had on San Francisco.

The festival’s entertainment will include

Food trucks will be at the Bastille Day Festival with a French history, including a Vietnamese food truck, a food truck with Moroccan food and an empanada truck run by a French chef.

The festival will also have a vintage Citroen car show. A petanque competition will be held with 4 clubs from the Bay Area. Petanque is a ball tossing yard game that is popular in France.

Course de Serveuses et Garcons de Cafe is a waiters’ race. Prizes will be awarded. You can meet Claudine Chalmers who has written books on the history of the French in San Francisco.

The Bastille Day Festival is open to the public and admission is free.

If you’d like to visit San Francisco for the Bastille Day celebrations, you should consider the following hotels. These hotels are offering discounted rates that will save you money on your visit. Here are some of the best deals.

Coupons For Concerts In Los Angeles

Save on Memorial Weekend Boat Party in Seattle

Save On A Mountain Getaway In California

Save on Taco Libre Truck Showdown VIII in Seattle