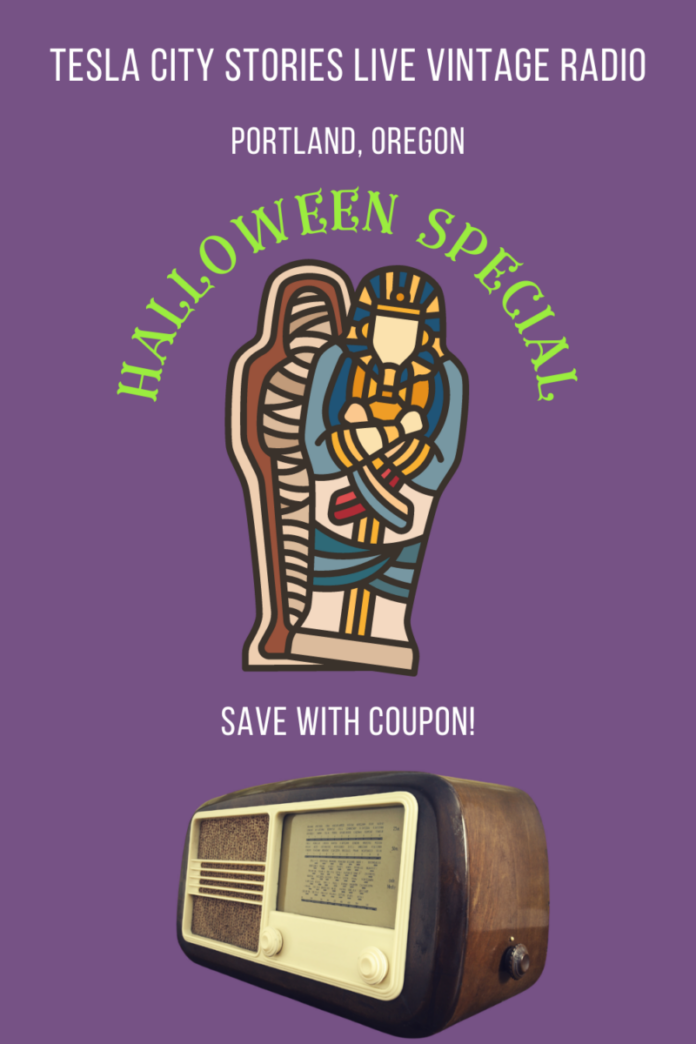 This Halloween season, it’s time to party like it’s 1944!  You can do this in Portland, Oregon, courtesy of Tesla City Stories!

The story behind Tesla City Stories is that since 2014, Tesla City Stories have been performing live shows.  They are taken from transcripts of uncovered archives of the Tesla Broadcasting Company from 1943 to 1945.  Now, they do a monthly performance of these shows.  It’s vintage radio comedy and drama performed with live music from the 1940s.  These shows are a range of themes like sitcoms, romances, westerns, sci-fi, horror, nad more.  The theme between all the shows is to the fictional location of Tesla City.

The first part is called “The Eyes of Ra”.  The first episode deals with the Wraith coming across a living mummy who wields the power of a god.  Can he save Tesla City from Ra’s cleansing fire – and if he can, at what cost?

The second part is called “The Judgment of Anubis”.  In this episode, the Wraith has broken the rules of an Egyptian god.  Not just any god, either, but the one who granted him his powers and earned Anubis’ ire.  Lazarus St. Georgie will relive the events that turned him into the Wraith as Bobek tries to restore his friend’s life.

The show is suitable for children ages eight years old and up.  There is no vaccine or mask requirement, but masks are encouraged.  You can request and get a K-95 mask free of charge.

Looking for a coupon to help you save money on the cost of your ticket?  Then you have come to the right place because we know of a great coupon!