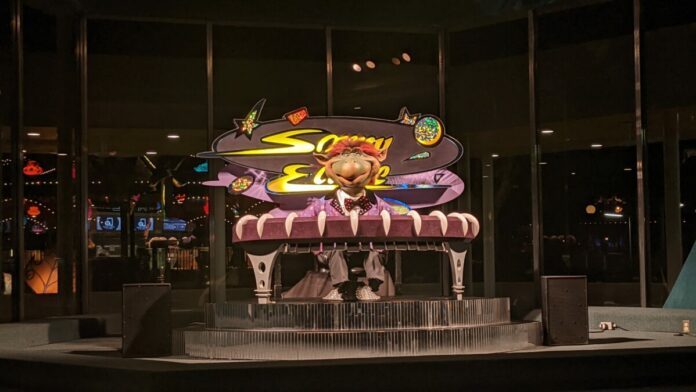 Some of my favorite dining experiences at Walt Disney World are the ones where it’s not just eating – there’s entertainment, too. Whether it’s feeling like you’re in outer space like at Space 220, watching animatronics like at T-Rex Cafe, or a character meal, there’s something truly special about it.

Unfortunately, those are usually sit down, or table service, meals, and they can get pretty expensive. Especially when you add in the tip!

That’s what I love about eating at Cosmic Ray’s Starlight Cafe. This is a counter service restaurant at Magic Kingdom. That means you order at the counter (or using mobile ordering), pick up your meal, and then find your own table. While it’s not cheap (nothing at Disney World is!), it is still more affordable than some of the other restaurants with entertainment.

And what is that entertainment, you might be asking?

Well, we’re going to go over that! In this dining review, we’ll talk about both the entertainment and food at Cosmic Ray’s. And then you’ll have a better idea of whether you should eat there on your next Disney World vacation! 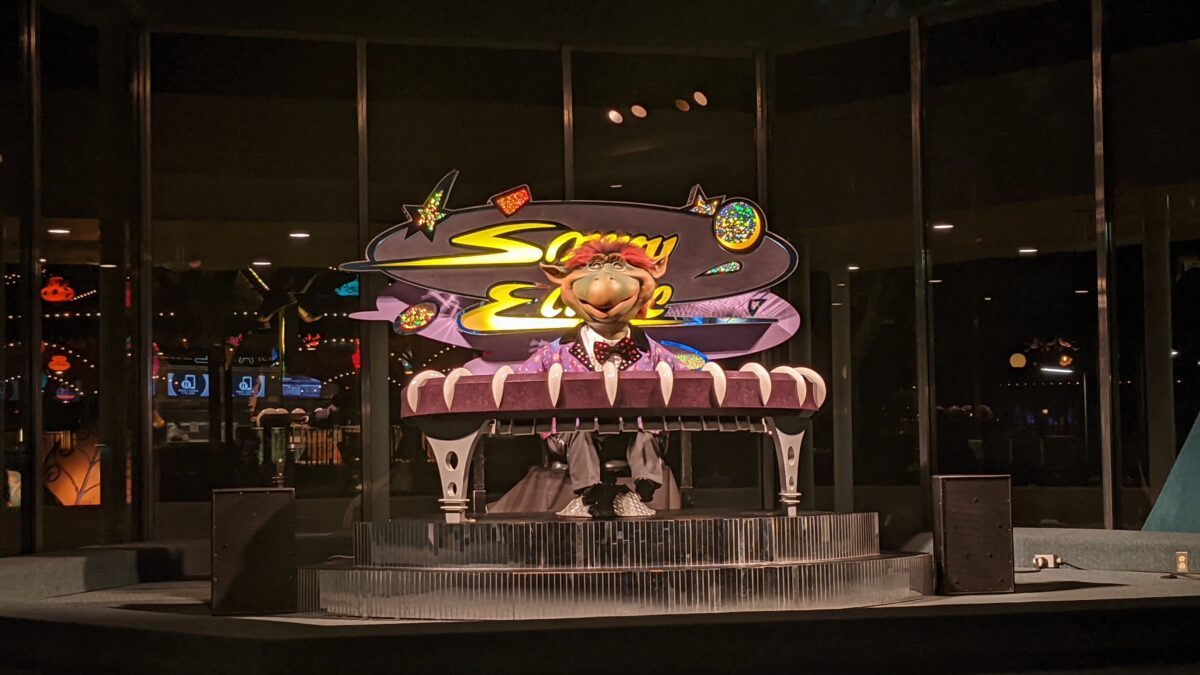 The headliner (and, well, only act) at Cosmic Ray’s is a lounge singer named Sonny Eclipse. In fitting with the restaurant’s Tomorrowland location, he’s not just any lounge singer. He’s actually an alien from the planet Zork. And throughout the day, you can enjoy his 27 minute long act inside the large dining area at Cosmic Ray’s.

Because he’s an animatronic, you’re not going to get a lot of variety. It’s the same act every time. However, if you’re like me, the jokes never get old. And what I mean by that is that I happen to LOVE corny jokes. He doesn’t just tell jokes, though. Sonny performs a number of original songs, too, along with his backup singers. (His backup singers, a trio called the Space Angels, happen to be invisible, though, so no animatronics for them!) But as fun as the entertainment at Cosmic Ray’s may be, it’s still not worth it if the food isn’t any good, right?

Luckily, there are some delicious options for lunch or dinner! 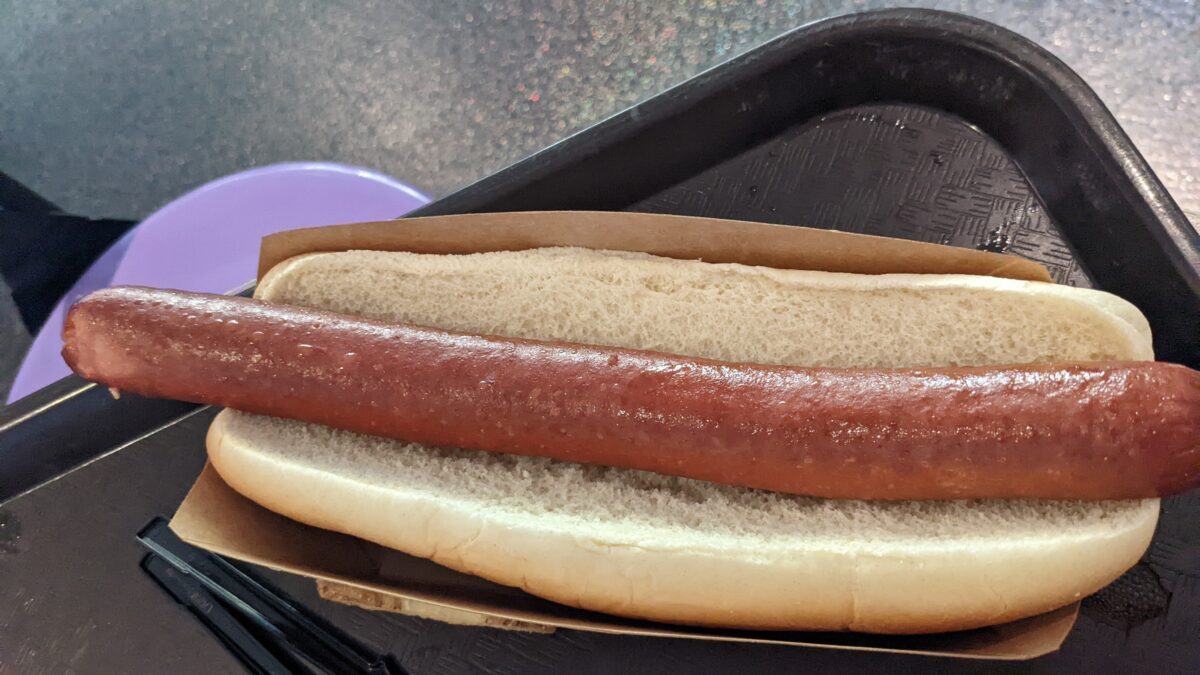 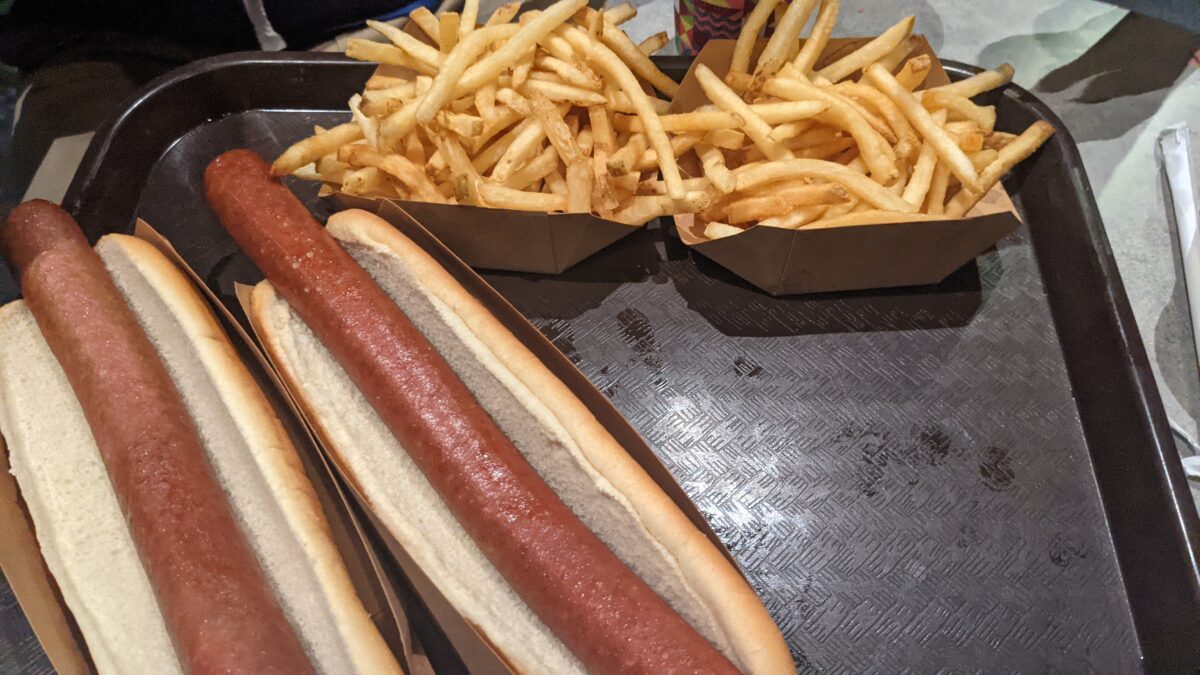 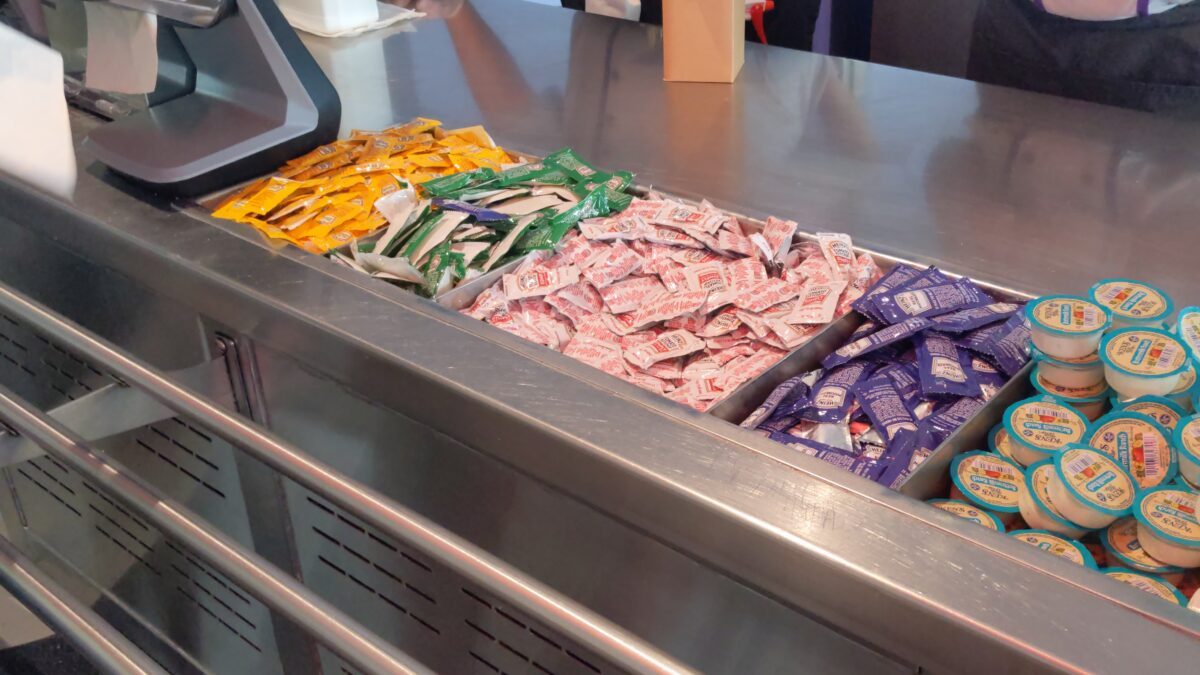 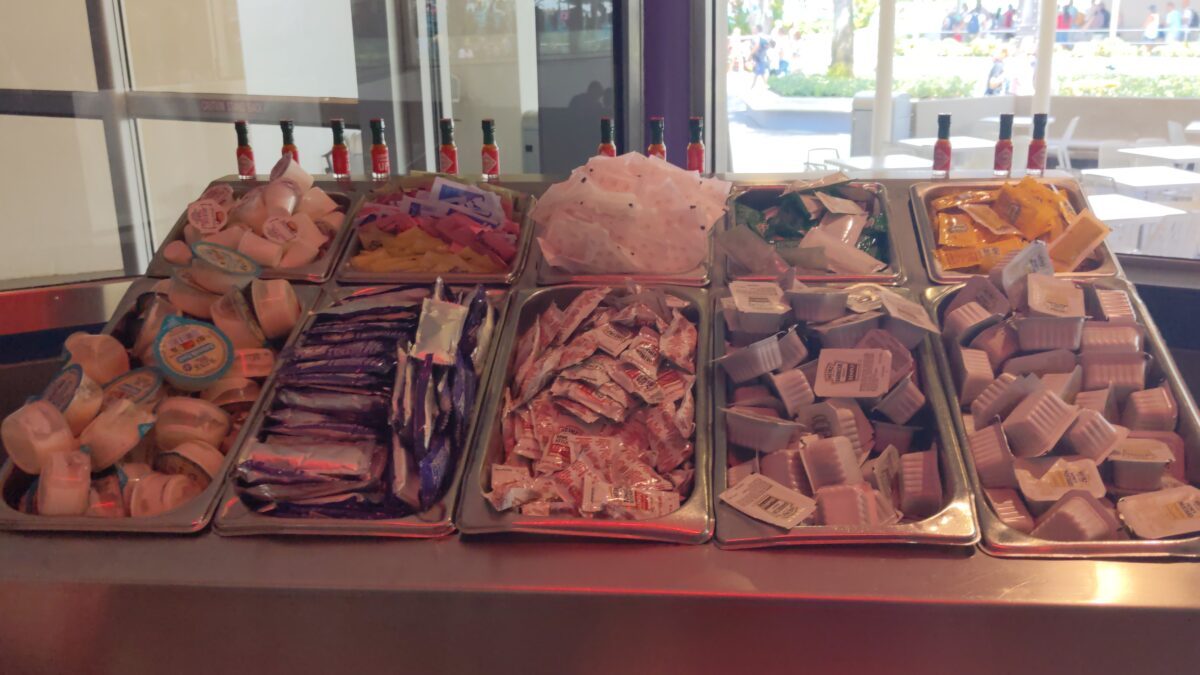 Our family really likes the footlong all-beef hot dogs at Cosmic Ray’s. They work well as a main entree. If you’re not that hungry – or want to save room for a dessert or a snack later – you can also split one hot dog between two people. The hot dog is delicious, and the bread is soft and good as well. There are also a number of condiments available to add to your hot dog. And if you’d like, there’s a version of the hot dog on the menu that comes with Walt’s favorite chili recipe and cheese. 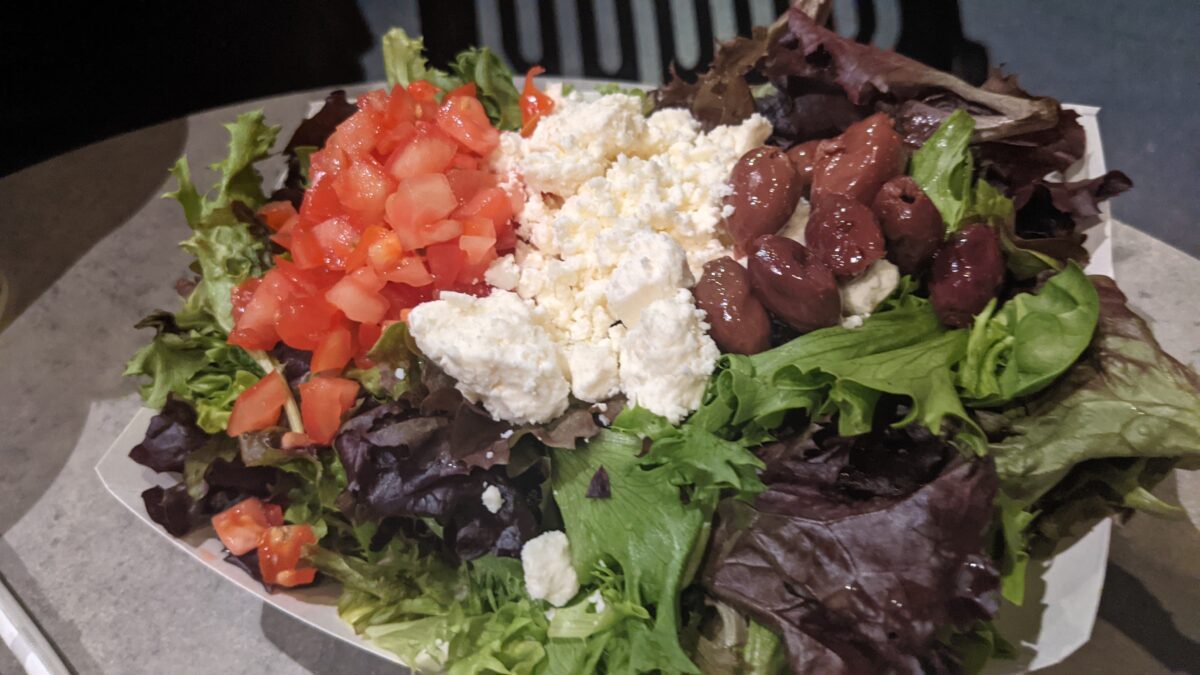 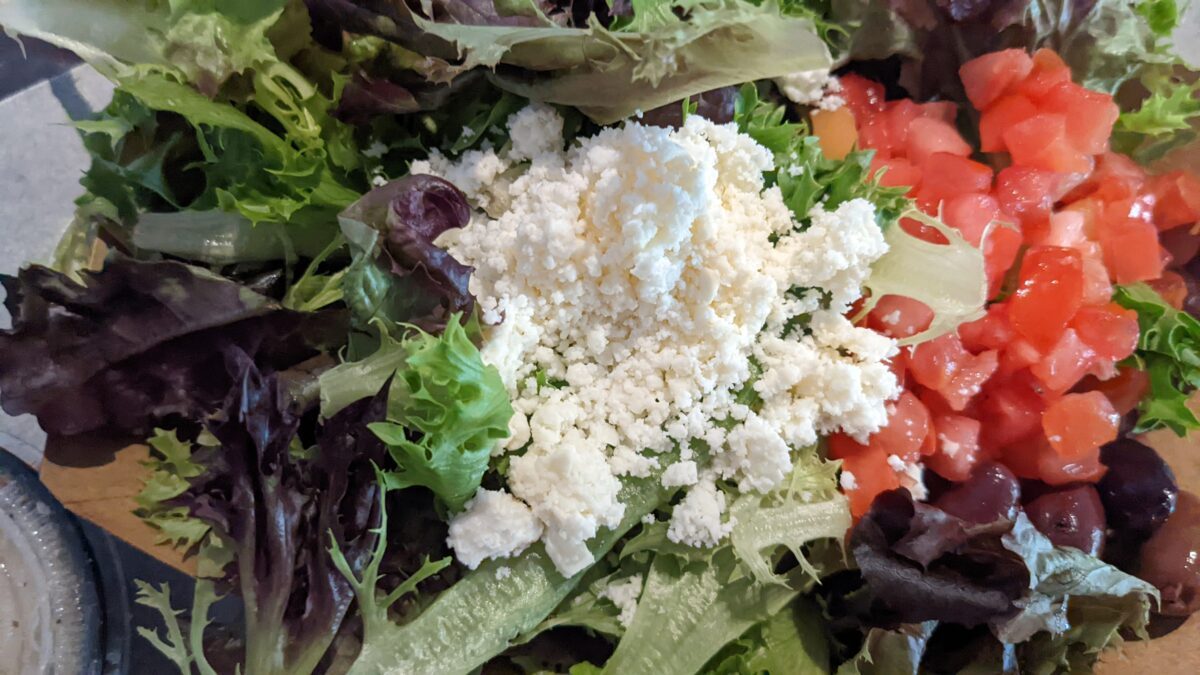 Another popular dish when our family eats at Cosmic Ray’s is the Greek Salad. The feta cheese is the real standout of the salad. The delicious olives are great, too, and the greens are nice and fresh. The dressing is good and is enough for the salad. In fact, perhaps the main negative is that the container can be a little too small, causing parts of the salad to fall out. Being given almost too much of something isn’t really the worst problem to have at a restaurant!

Other menu options include chicken strips, a barbecue chicken sandwich, and cheeseburgers (including a Bayou Burger with jalapeño pimento cheese and crispy andouille sausage). You can also order a version of the Greek Salad we mentioned earlier that comes with chicken strips.

Currently, the dessert offered at Cosmic Ray’s is a chocolate bundt cake with purple icing. You can sometimes choose other specialty offerings for dessert, including treats themed to various holidays, so be sure to check the menu when you visit.

Cosmic Ray’s Starlight Cafe is a great dining option on a Disney World trip. You can listen to an animatronic alien sing and crack jokes while you eat, making for a special dining experience you probably can’t have back home. It’s among the more affordable places to eat inside the Disney World theme parks. And the food is delicious!

More Ways to Save at Disney World

Wouldn’t it be nice if you could make your entire Disney trip more affordable, not just a meal?

Well, at Green Vacation Deals, we are always looking for more ways to save money at Walt Disney World.

We recommend that you use one of these methods to buy Disney World tickets at a discount.

And we have saved so much money over the years by staying at DVC hotels (even though we aren’t Disney Vacation Club members!). A great way to do this is by going through David’s Vacation Club Rentals.

For more ideas on where to eat at the Magic Kingdom, check out some of our other dining reviews: