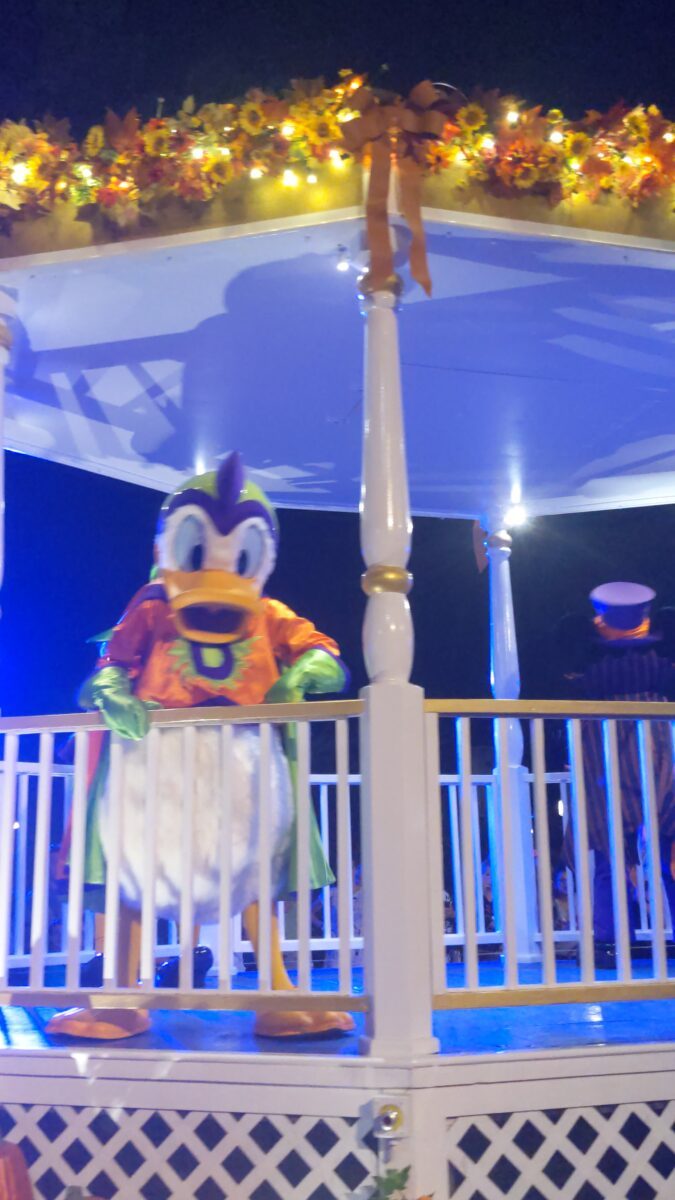 If you’re planning on attending Mickey’s Not So Scary Halloween Party, you’ll certainly want to make the most of it!

Mickey’s Not So Scary Halloween Party is a popular nighttime event held in the fall at Walt Disney World. We go over it in detail here in this guide. But today, we’re going to talk about some tips to follow so that you’ll have an amazing time at the Halloween Party.

Bring Your Own Bag 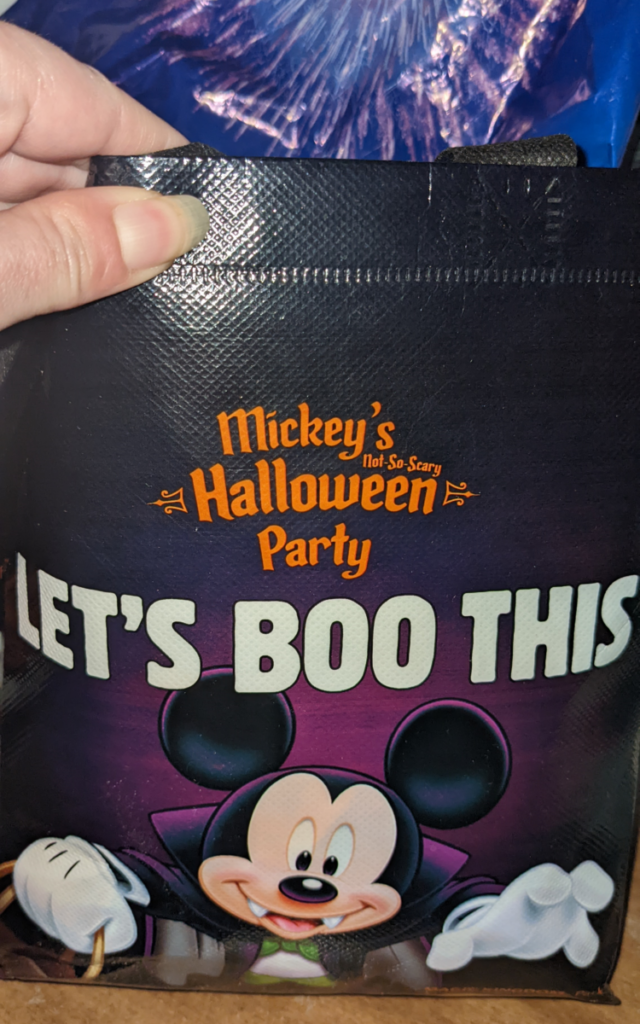 If trick or treating is your thing, bring an extra bag that’s large enough to hold a lot of candy. You get a free bag with your ticket and it’s really cute, but if you stop at all the trick-or-treating locations then it will definitely be stuffed by the end of the night.

You should still pick up the bag as a souvenir, but also bring a larger bag from home if you want a lot of trick or treating candy. Check out this list of the 100 best Disney Halloween bags for trick-or-treating.

Avoid the Lines at the Entrance

There’s more than one way to get into the Not-So-Scary Halloween Party. Let’s go over what happens if you don’t also have admission to Magic Kingdom that day and if you do.

No Admission to Magic Kingdom

This would be the case if you have a Halloween Party ticket but no ticket for Magic Kingdom that day.

In this case, you can enter the Magic Kingdom as early as 4 pm, but you won’t be able to go through the regular Magic Kingdom lines. You’ll have a special line just for people going to the Halloween Party. The benefit is that you’ll go ahead and get your wristband (you have to wear this as proof of your ticket), Party map, and trick or treating bag right when you enter the park. And you get to walk through a special part of Main Street USA to enter the park.

However, your lines will most likely be a lot longer than the regular Magic Kingdom lines.

This is the case if you have a Halloween Party ticket, Disney World ticket or annual pass, and Magic Kingdom reservation for the day of the party.

It also works if you have a Party ticket, Disney World ticket with park hopper or annual pass, and a reservation for a different park (Hollywood Studios, Epcot or Animal Kingdom) for the day of the party. (You just won’t be able to enter the Magic Kingdom until after 2 pm, and you’ll need to go to the first park before you “park hop” to Magic Kingdom.)

Either way, the faster lines into Magic Kingdom are going to be the regular admission lines, NOT the Party lines.

If you want to avoid long lines, arrive before 6 pm (when the regular park hours end) – and use the regular lines!

You’ll have to pick up a wristband at some point between 4 and 6 pm while inside the park. But even if you have to wait in line for that, it most likely will be a lot shorter than the line you avoided at the front of the park.

We’ve picked up wristbands during parties at Tortuga Tavern in Adventureland, in front of Mickey’s Philharmagic in Fantasyland, and in front of where Stitch’s Great Escape used to be in Tomorrowland. You can look for the Wristband Distribution sign. 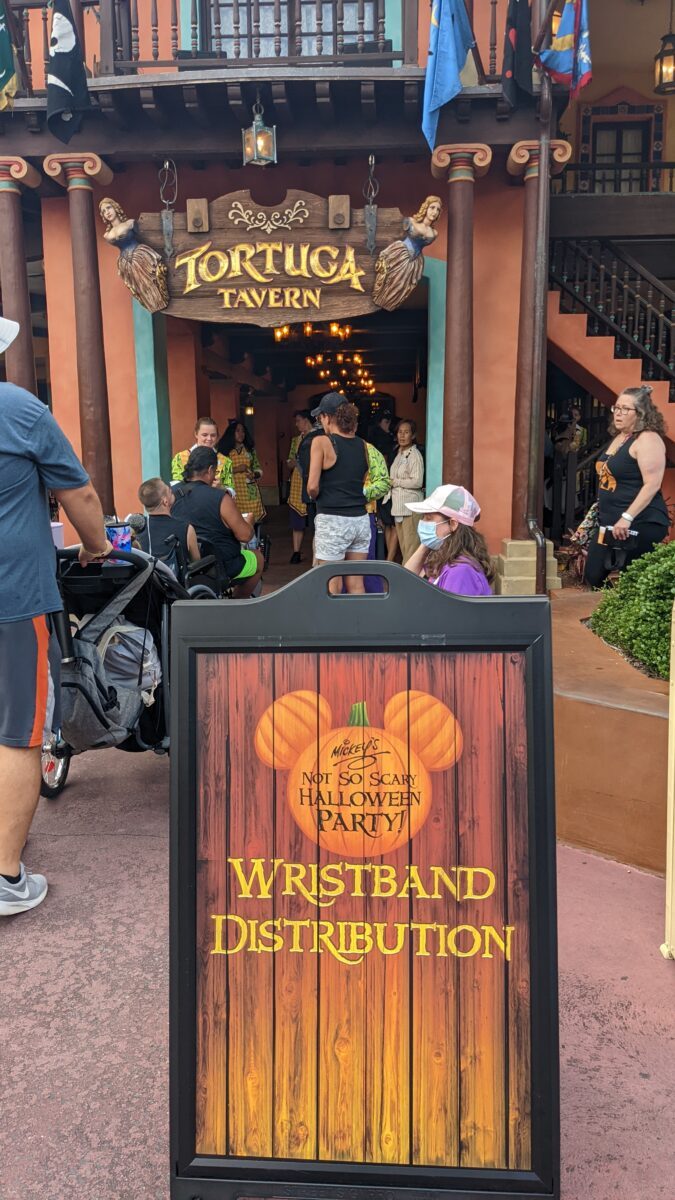 On the day of the party, eat dinner before 6 pm. That’s because when the regular park hours end at 6 pm, most of the restaurants close at that time.

Some places to eat will remain closed during the party, since they will function as a trick or treating location. (Columbia Harbour House is an example of this.)

Other restaurants will reopen at 7 pm, when the party officially starts. But that doesn’t do you any good between 6 and 7 pm.

Pecos Bill Tall Tale Inn & Cafe will still be open between 6 and 7 pm, but mobile ordering won’t be available so you’ll be stuck waiting in line.

Basically, avoid having dinner between 6 and 7 pm, because your options will be so limited.

And eating dinner after 7 pm isn’t ideal, because it’s taking up party time that could be used at a dance party, riding attractions, trick or treating, watching shows, etc.

So instead, make sure you have an early dinner – or a late and large lunch – prior to 6 pm. You’ll have more options, won’t waste party time, and won’t be hungry (or hangry!) at the beginning of the party. At the same time, you won’t be too stuffed to enjoy Halloween candy or some delicious Halloween treats!

Give Trick or Treating a Try

Earlier, we talked about bringing a larger bag for candy if you know you’ll be doing lots of trick or treating.

But what if you don’t plan on trick-or-treating?

If you are completely against doing it, then obviously, don’t do it! There are plenty of other things to do during the Party.

But if you’re a little bit undecided, I recommend you give it a try! You don’t need to be a child or in costume to do it, either. Try trick or treating once – remember, you already have the free bag they give out with the wristbands – and then you’ll have a better idea of if you want to do it at other locations.

And for that one time stop, consider trick or treating at one of these attractions:

There’s something even more fun about trick or treating when it involves walking through an attraction. Especially when it gives you a chance to sit down, eat some candy, and rest your feet! And at the last two locations, you can even enjoy some Halloween themed entertainment. 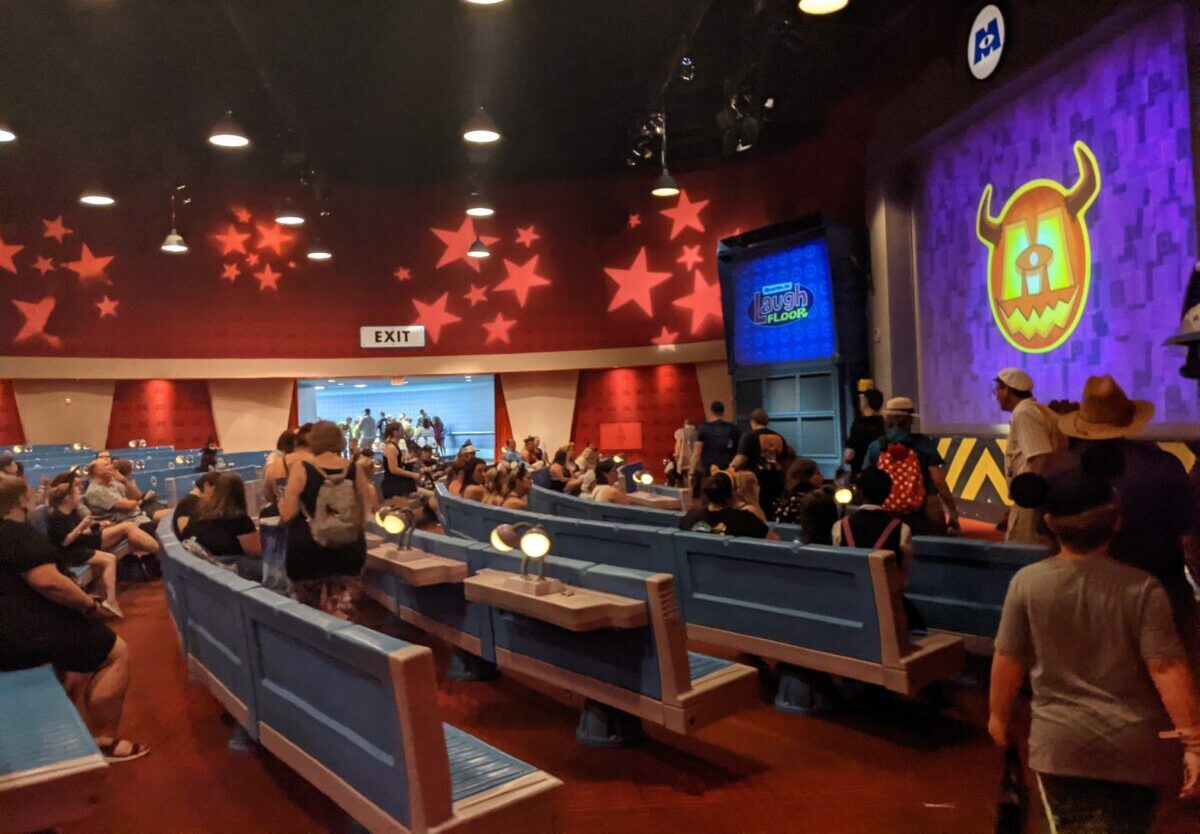 Note: If you’re interested in trick-or-treating but have food allergies, ask a Cast Member (aka a Disney World employee) for a special teal colored bag. If you use that bag, you’ll receive teal tokens, which you can then redeem for special treats at Allergy-Friendly Centers. One of the Centers is located at Liberty Square, and the other is on Main Street USA near the park entrance.

Are you a big fan of A Goofy Movie? You can see Max – dressed up as Powerline – before the Boo to You Halloween Parade. You’ll need to be waiting in the Main Street USA area to see him in a mini pre-parade performance (you can even get up and dance along!). Please note that if you are waiting in another area, such as the Hub (the circle in front of Cinderella Castle) or Frontierland, then you will not be able to see it. 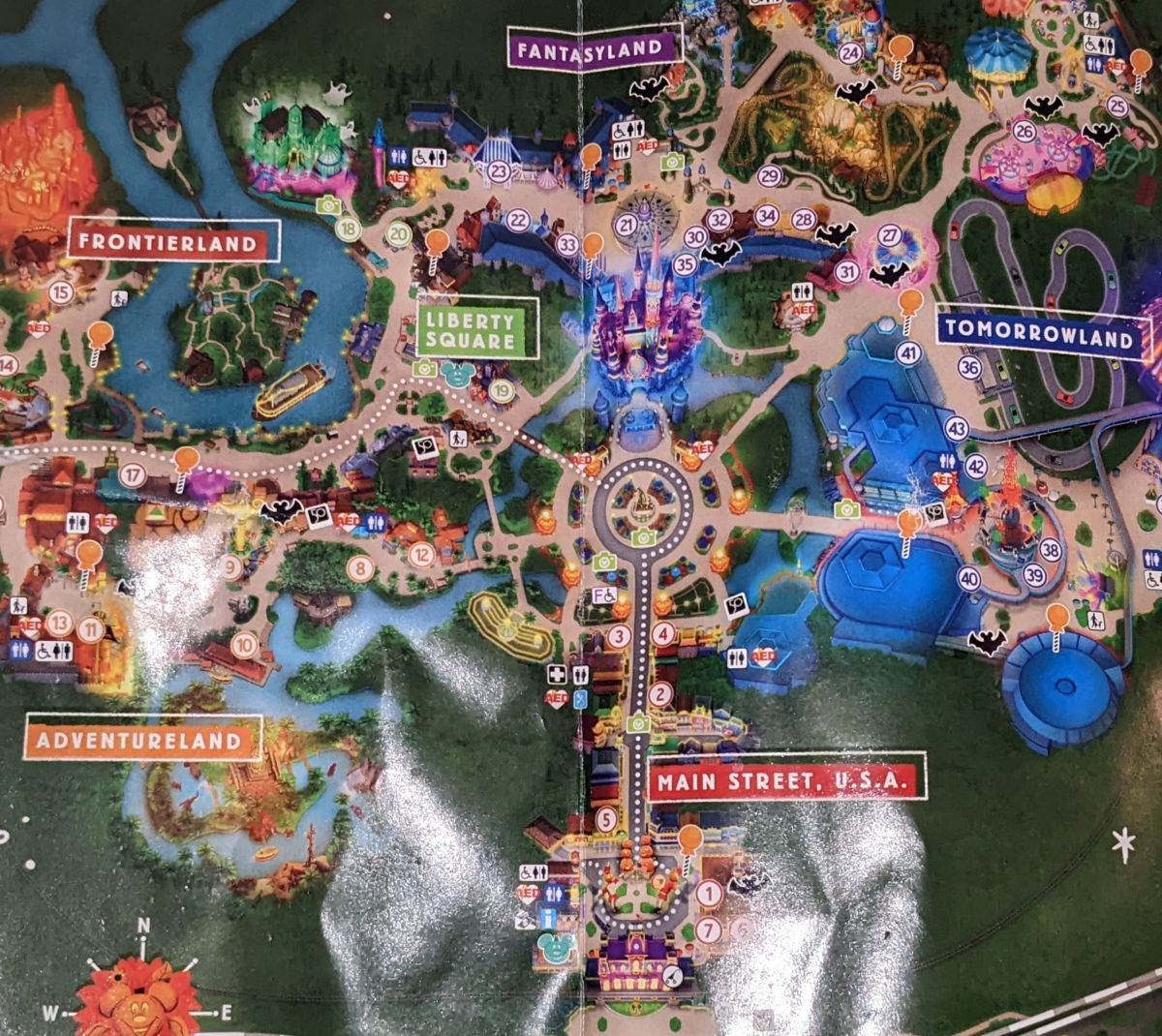 Speaking of where to view the parade, check your Halloween Party map to see the parade route (represented by a white dotted line). The parade starts in Frontierland and ends in the Main Street USA area. It makes a couple of partial circles, one in the Hub and one near the front of the park. But these are not full circles, so check your map before you pick out a place to watch the parade.

Leave Before the Second Parade

Now, if you love the Mickey’s “Boo-To-You” Halloween parade and want to watch it both times it takes place – at 9:15 pm and 11:15 pm – then you definitely should.

But if you don’t care about missing the second parade and want to get back to your hotel room at a decent time, then leave before the 11:15 pm parade.

Most people at the Party will either be waiting for the parade or taking advantage of shorter wait times for rides. So you won’t have to deal with large crowds. And you’ll have a much easier time waiting for transportation, whether you’re taking the monorail, ferry, or bus back to your hotel or parking.

Walk Back to Your Hotel

If you don’t want to leave early, you may be able to avoid waiting for the monorail, ferry or buses altogether.

If you’re staying at the Contemporary Resort or the Grand Floridian Resort, take advantage of the walking paths back to your hotel. Even leaving the Halloween Party at midnight, there were other families on the walkway back to Grand Floridian on our last trip to Disney World. So you don’t need to worry that you’ll be walking back late at night with no one else around.

Save on Disney Cruises from Port Canaveral and Miami