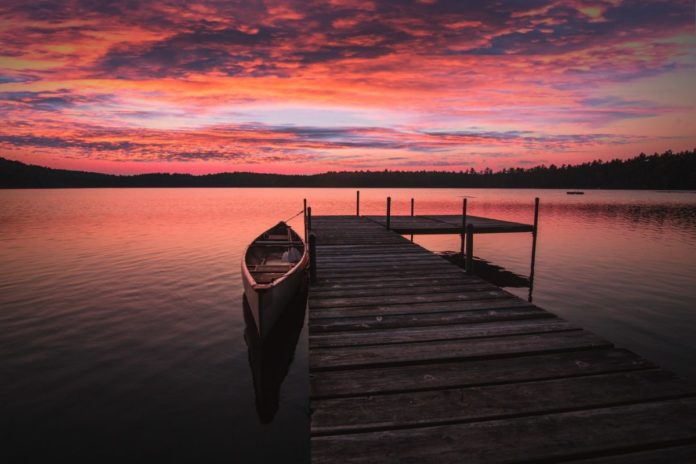 Are you wanting to get away from the hustle and bustle of city life?  Instead of the sounds of traffic, would you like to hear the lapping of waves on the shore and birds chirping?  If so, a vacation at Big Moose Lake might be just what you’re looking for.

Take your Adirondack getaway to Big Moose Lake in New York.  Route 28 goes to Big Moose Lake and is said to be one of the most scenic drives in the U.S.  Listen to the sounds of loons on the lake as you watch the sunrise.  There are sandy beaches for swimming.  Enjoy picture-perfect mountain views.  Play lawn games.

Anglers come to Big Moose Lake in pursuit of brook trout, lake trout, yellow perch, brown trout and splake. Green Vacation Deals can show you ways to save money on rods and reels.

There are walking, hiking and biking trails galore.

At the end of the year, winter sports like cross country skiing, snowmobiling, snowshoeing, and snow tubing.

Big Moose Lake isn’t only known for its beauty.  In 1906, it was the site of a brutal murder that shocked and fascinated the country.

Grace Brown was a beautiful 19-year-old who worked at the Gillette Skirt Factory in Cortland, New York.  The owner’s nephew, Chester Gillette, was a handsome womanizer.  Chester dated Grace for 2 years, though he was careful never to be seen with her in public.

Grace discovered she was pregnant.  When told, Chester said he needed time to think.  Grace pressed Chester to marry her and Chester suggested a trip to the Adirondacks in July, 1905.  Excited, Grace believed this was to be a wedding trip.

Chester rented a boat at Big Moose Lake and they rowed out on the lake.  The boat wasn’t returned and a search party went out the next day.  They found the boat overturned and Grace’s body floating in the lake.

Chester had registered under an assumed name at a hotel in Inlet, a nearby town.  He was found and arrested.  Chester claimed he didn’t know Grace.  Then he changed his story, saying she killed herself because he didn’t love her anymore.

The trial was held at the courthouse in Herkimer and was the most sensational ever held in that area.  Hundreds came to see it and famous reporters attended, including Bat Masterson.  Copies of Grace’s love letters to Chester were published in book form and sold outside the courtroom during the trial.

People had picnics on the lawn of the courthouse, hoping to hear tidbits of the trial.  Visitors were allowed to walk past Chester’s cell to wish him luck or to curse him.

The prosecution said Chester had hit Grace over the head and did nothing to save her when she went into the water. The jury deliberated for five hours and then found him guilty of first-degree murder.  Chester was calm and even smiled when the sentence of death by electric chair was given.

After his conviction, Chester was transferred from Herkimer County Jail to Auburn Correctional Facility.  Many of the curious stood along the roadside on the route, waiting to get a glimpse of America’s most infamous murderer.

In the end, he finally confessed to the murder to his spiritual adviser at the prison.  The adviser never revealed the facts of the confession.  On March 30, 1908, Chester Gillette was executed.

Many people continued to be fascinated by this tragic tale of murder.  Theodore Drieser’s novel, “An American Tragedy” was based on the Grace Brown murder.  “A Place In The Sun,” a 1951 movie starring Elizabeth Taylor and Montgomery Cliff,  was adapted from the Dreiser novel.

“A Northern Light” is a 2003 novel by Jennifer Donnelly based on the murder.  “Sasquatch Camp” was written by Robert Trent in 2013 and is also based on the murder in the lake.  In 1986, 2 non-fiction books, “Adirondacks Tragedy” by Joseph Brownell and Patricia Wawrzaszek and “Murder In The Adirondacks: An American Tragedy Revisited” by Craig Brandon were published.

The Ghost of Grace Brown

Residents of the Adirondacks organized a memorial to the centennial of Grace Brown’s murder on July 11, 2006.  There was a small flotilla of watercraft and a wreath-laying ceremony on South Bay.  There is a plaque on the banks of Big Moose Lake commemorating the murder.

There have been numerous sightings of her ghost over the years.  Many people have reported seeing her fall from a boat into Big Moose Lake.  Her spirit also haunts several lakeside rental cottages.  Grace’s ghost enters the cottages and extinguishes the lights.  Many residents and visitors have seen her walking along the lakeshore.  Her spirit is described as sad.

The television series “Unsolved Mysteries” had an episode in 1996 about the murder.  Several people appeared on the show to tell about seeing Grace’s ghost.

If you’d like to visit Big Moose Lake, the nearby Brown Tract Pond Campground has 90 tent and trail sites.  Camping for tents and 30’ RVs can be accommodated here.

If you’re interested in renting an RV for your trip, Green Vacation Deals recommends RVshare.

Green Vacation Deals can share ways to save money if you’re interested in buying a tent, a tipi, or camping cookware.

If your preference is for a hotel, the following have rates up to 26% off the best available prices.  Click here to book these hotels at a discounted nightly rate.