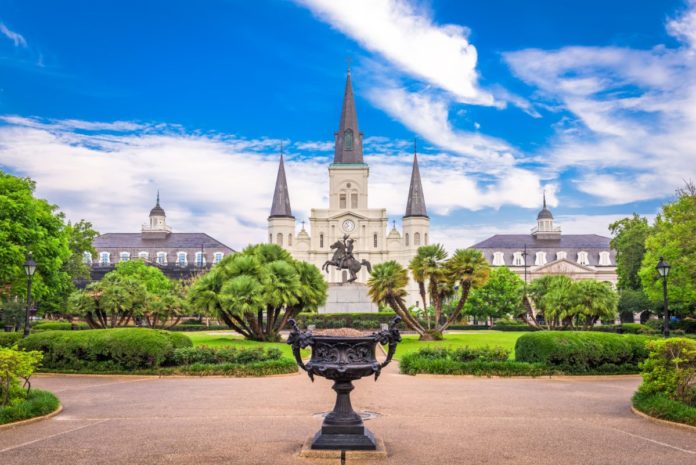 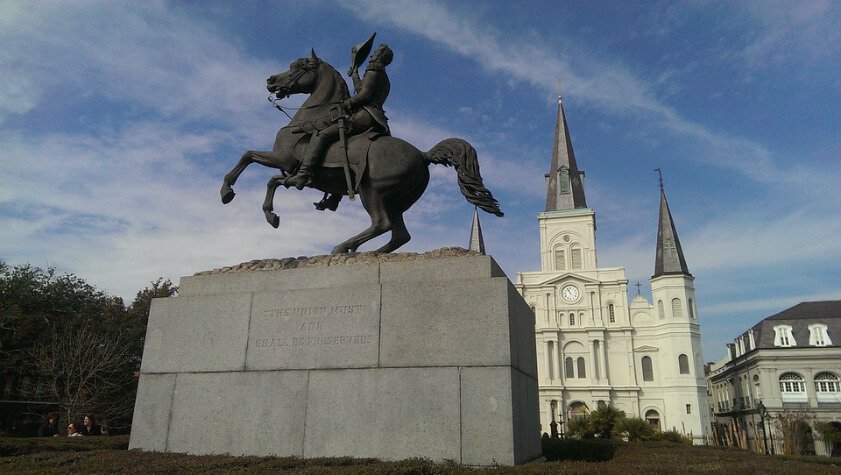 New Orleans was settled in the spring of 1718 by the French.  It was named in honor of the Regent of France, Philip II, Duke of Orleans.  In 1722, it was made the capital of French Louisiana. In 1763, French Louisiana was ceded to the Spanish Empire.  Later, it was returned to French control and then, in 1803, Napoleon sold Louisiana to the U.S. in the Louisiana Purchase.

From the early days, New Orleans was known for its cosmopolitan polyglot population and mixture of cultures.  It grew rapidly with the influx of Americans, Africans, French and Creole French. This mixture has created a city and a culture unlike any other in the world. 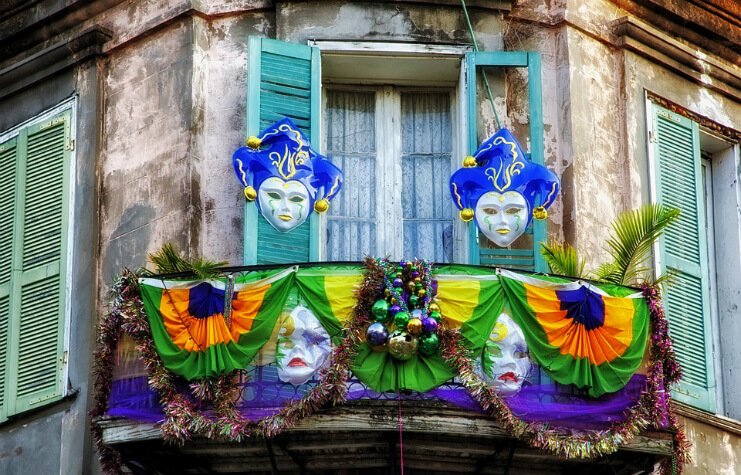 New Orleans is one of a kind.  No city can compete when it comes to food, cultures, historic architecture and tourist activities.  Visitors are delighted by the French Creole elegance of the French Quarter and the opulence of the Garden District.

During Mardi Gras, New Orleans becomes the country’s center of action.  Downtown is turned into an adult playground. Parades in residential areas provide entertainment for children and the young at heart.  And anytime of year, you can find live music, delectable Creole and Cajun cuisine, fresh seafood, farmers markets, unique shopping, nightlife and so much more!  Find out how to save money on a Mardi Gras Vacation Package here.

Jazz was born in New Orleans.  In Congo Square, to be exact, Jazz is the music that was created when African, African-Caribbean and European traditional converged in New Orleans.  Music was part of every aspect of social life in the “Big Easy,” including Carnival, debutante balls, parlor parties and even funerals. New Orleans was fertile ground for that new art form.  You can save on a New Orleans Jazz Cruise by clicking here.

Many of the earliest names in Jazz were from Louisiana – Jelly Roll Martin and Louis Armstrong,  Others came later including Louis Prima, Al Hirt, Pete Fountain, Edward “Kidd” Jordan and Ellis, Branford and Winton Marsalis.

The Voodoo of New Orleans

Voodoo is as much a part of New Orleans as Jazz, Mardi Gras and gumbo.  Voodoo is a religion connected to spirits, ancestry and nature. It is a fusion of African, Haitian and Catholic spiritual beliefs and practices.  It became popular with slaves in New Orleans during the 18th centruy and has its share of colorful mythologies and personalities.

New Orleans is a great place to learn about Voodoo.  Begin with the New Orleans Historic Voodoo Museum. A small building, its two rooms are packed with artifacts from Africa, Haiti and New Orleans detailing Voodoo history and the symbols behind its rituals.  Drum music adds to the ambience. See Voodoo dolls, Voodoo altars, a zombie whip from Haiti and Rougaron (alligator man).

Learn about New Orleans’ famous Voodoo Queen, Marie Laveau.  She lived in the city during the 19th century and practiced both Catholicism and Voodoo.  Her healing powers were so legendary devotees continue to make a pilgrimage to her resting place in St. Louis Cemetery #1.

Take a tour to learn more about Voodoo, Vampires and Ghosts in New Orleans. 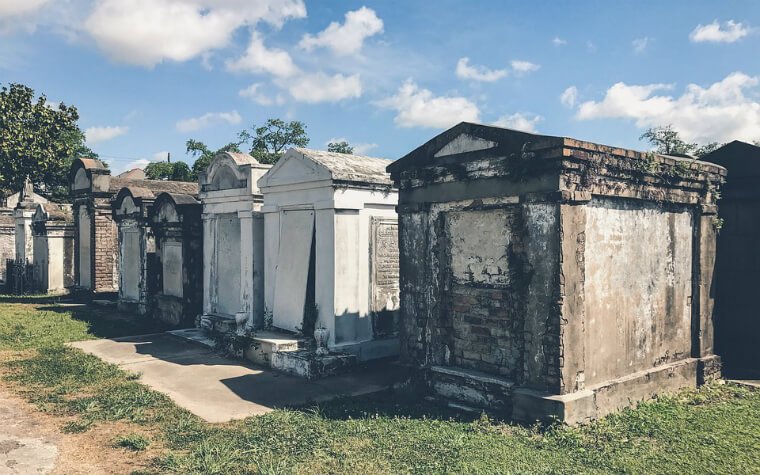 New Orleans is believed to be America’s Most Haunted City and is home to more haunted hotels than any other place.  If you’re looking for a paranormal experience in your hotel stay, you should consider the following hotels. And click on the links to get a great price for them:

The Fleur de lis Mansion, The Avenue Bed & Breakfast, The Jean Lafitte House are three Bed & Breakfasts that are said to be haunted.  New Orleans is a place where the dead refuse to rest. From pirates to yellow fever victims to murdered slaves, all manner of other worldly spirits might just join you on your evening stroll.  Atrocities were committed in the infamous LaLaurie Mansion. New Orleans teems with restless spirits, Its eerie cemeteries have earned it the name of “City Of The Dead.”

New Orleans is rich in all manner of macabre.  You can’t go far in the French Quarter without passing a site infamous for its vampire lore.  The first vampire stories originate with the settling of New Orleans by the French. The King of France sent a group of girls to marry the first French settlers.  Each girl had a casket shaped box of different sizes, presumably to hold their belongings. The girls lived in the Ursuline Convent on Chartres Street until they got married.  The casket boxes were stored on the third floor and were found to be empty. The mortality rate in New Orleans skyrocketed with the girls’ arrivals, with the infant mortality rate highly affected.  Legend has it that the casket boxes are still stored on the third floor and no one is allowed on that floor.

The Saint Germain House on Royal Street was the home of Jacques St. Germain in 1902.  A party throwing socialite, he served delectable food but was never seen to eat any of it, he only drank glass after glass of red wine.  After a woman accused him of trying to bite her neck, St. Germain vanished. The police searched his house and found no food but many bottles of red wine that was a mixture of wine and blood.

It is easy to imagine vampires creeping from the shadows of the crypts or prowling for victims in the unlit alleys in the French Quarter. 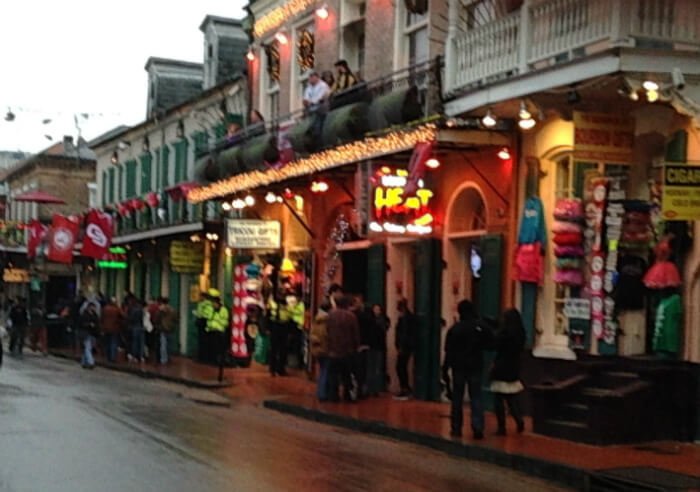 New Orleans has some of the most interesting architecture, food and entertainment dispersed through different neighborhoods.

The Garden District has classic revival mansions, colleges and universities and St. Charles Streetcar.  You can go boutique shopping on Magnolia Street and walk down lovely tree lined residential streets.

Marigny/Bywater offers a vibrant arts and culture scene, a bohemian residential vibe and the St. Claude Arts District.  You can enjoy live music on Frenchman Street.

Lakeview has family fun in City Park and waterfront views and activities,  Enjoy quaint dining and shopping on Harrison Avenue. 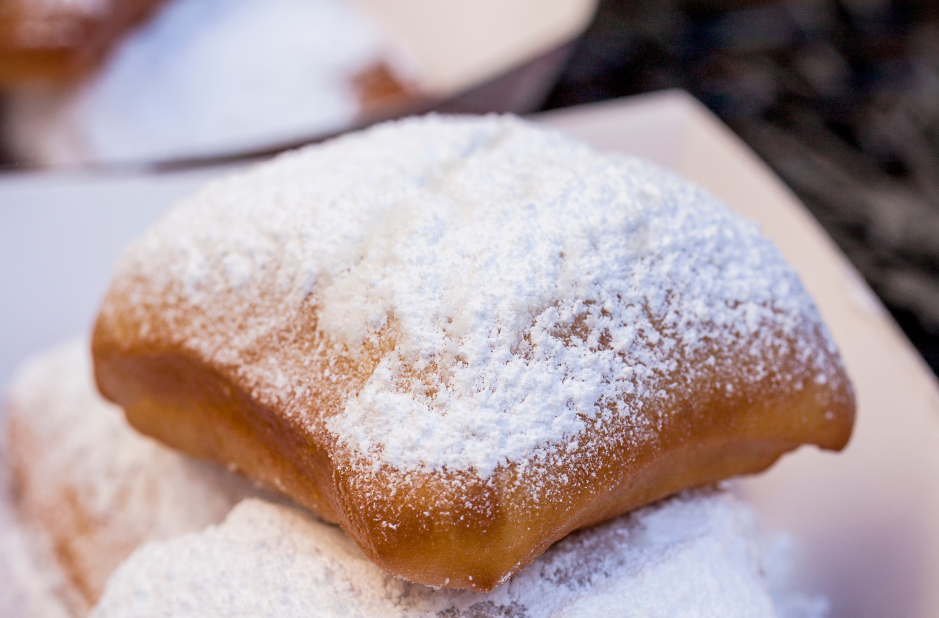 New Orleans is known for its delicious food.  Creole and Cajun cuisine dominate here. Try jambalaya, po boys, beignets, gumbo and maybe even gator.  You can see this on the Taste of Nawlins Tour. 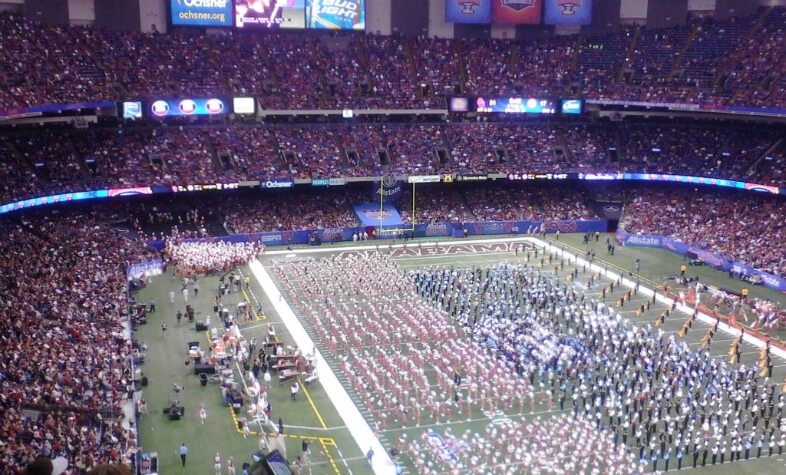 New Orleans has been called “The Festival Capital of the World” and “Best City In America For Festivals.”  It is home to over 130 festivals each year:

I’ve been to the Sugar Bowl.  I saw a great game that everybody was talking about the next day and saw a fabulous half time show!

King Cake Festival celebrates one of New Orleans’ sweetest treats: King Cake!  You can taste dozens of King Cakes from bakeries and restaurants.

Tet Fest is a free celebration of Vietnamexe New Year

Hogs For The Cause

French Quarter Festival is the largest free music festival in the U.S.

Greek Fest is celebrated on Bayou St. John at the oldest Greek Orthodox church in the Americas

Festigals is a female empowering getaway

Tales of the Cocktail

Tales of the Cocktail is a festival filled with seminars, workships, tastings, competitions and more

San Fermin en Nueva Orleans is the New Orleans version of the running of the bulls.  Participants run in the streets chased by roller derby girls with plastic bats. There is a pre-race celebration and a post race celebration.

Dirty Linen Night is an art walk in the French Quarter

Southern Decadence is the largest event in the South with over 160,000 participants

Celebration In The Oaks

Bonfire On The Levee 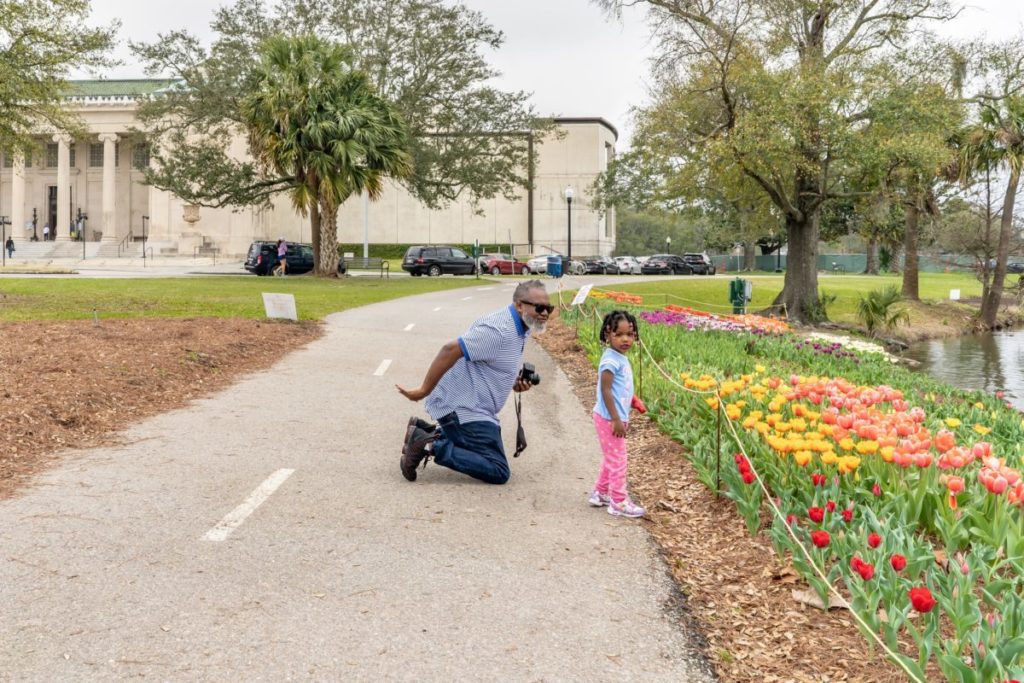 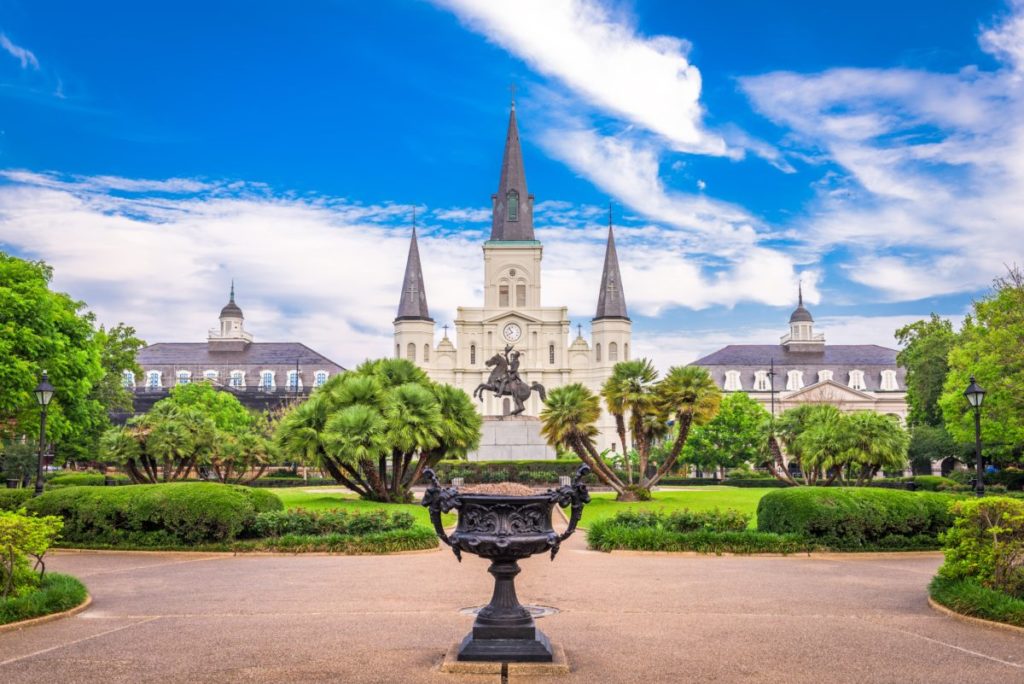 Throughout this travel guide, we’ve given you links to help you save money on your New Orleans trip.  But here are a few more ways you can save in New Orleans.

If you click here, you can read a comparison between the Power Pass and the Sightseeing Pass.  These are two cards you can purchase that can help you save money on top New Orleans sightseeing attractions.

Find out how to get cheap flights to New Orleans by clicking here.

You can save money on New Orleans hotels by clicking here.

Save on the Chalmette Battlefield Cruise by clicking here.