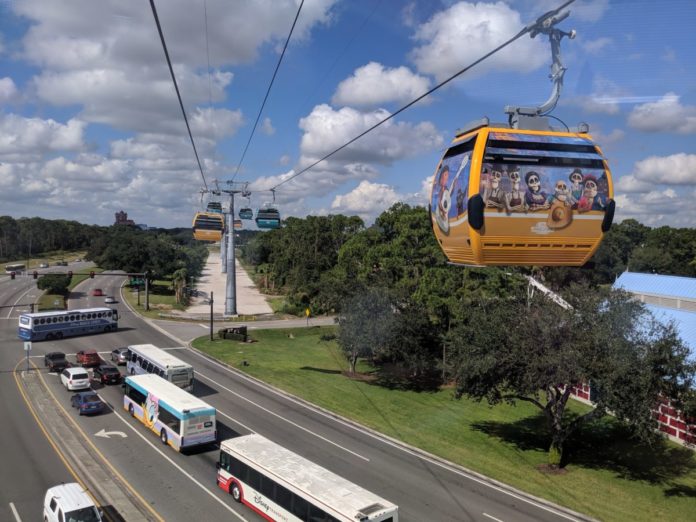 Green Vacation Deals readers will remember us mentioning that Disney’s Skyliner was opening today, on September 29th, 2019.  Naturally, we wanted to be the first in line to try it!  So we booked our stay at the Pop Century hotel so we could be here.

So what is Disney’s Skyliner?  It’s a brand new transportation system that gets guests to Hollywood Studios and Epcot theme parks a lot faster.  If you are staying in Art of Animation or Pop Century, you can find the Disney Skyliner station between the two hotels.  It is maybe a slightly shorter walk from Art of Animation, but it’s basically very close to both hotels.  We’re staying in a preferred room at Pop Century so it is incredibly close to our room.

We were excited, but did wonder how well it would go.  After all, this is a brand new transportation system.  Would there be any glitches?  Would we even want to use it again?  And did it save time as compared to the busses?

Well, the answer to this is…my family loved it!  You can see a video from opening day here:

What We Loved About Disney’s Skyliner

There is just so much to love about Disney’s Skyliner.  The main thing is how quickly and efficiently it worked.  I was impressed with this, especially since it was the first day.  When we arrived to the Disney skyliner station between Art of Animation and Pop Century, there wasn’t much of a line.  From there, we told the Disney cast member how many people were in our party and we got right on a gondola.

One interesting thing about the gondola system: it never really stops.  You walk on it as it is slightly moving.  So make sure you don’t dawdle!  It’s kind of like how you get on the Haunted Mansion or Little Mermaid ride.  But like with both those rides, it makes the whole process so much more efficient.  I commented to my family as we left later in the afternoon how nice it was to not have to worry about catching a bus.  You don’t have to really time anything.  It’s just a really efficient system of family after family entering the gondolas.  The gondolas fit around maybe eight people very comfortably.  Sometimes my family sat with another family, other times we did not.

Oh, and here’s another great thing about this transportation system: no standing!  You might have to stand on the bus or monorail.  But not here.  I really, really like this aspect. So after we boarded the gondola, we went to Caribbean.  Now, I love stayed at Disney’s Caribbean Resort and I already knew it was beautiful.  But I got an even better appreciation of how beautiful the hotel is by seeing aerial views of it.

So once we got to Caribbean, we left our gondola to board one for Epcot.  You almost felt like you were at a train station.  Once again, the whole process was very efficient.  The cast was also really friendly and positive.  We then boarded a gondola to Epcot.  It stopped at the stop in front of Disney’s Riviera Resort, the newest DVC hotel that hasn’t opened yet.  We got great views of it!  But since we weren’t getting off there, we could just stay in our gondola.  I really liked this because I would have hated having to keep getting in a new gondola over and over.

From there, we were off to Epcot.  All in all, it took us about thirty minutes to get to Epcot.  I think this is way preferable to the bus system because sometimes it takes thirty minutes alone just for the bus to come.

Later, we went to Hollywood Studios.  This was an even quicker ride.  We went to Caribbean, then boarded the gondola for Hollywood Studios.  We had booked a fastpass to the Indiana Jones stunt show thinking we probably couldn’t make it.  But we arrived with time to spare!  It was really kind of crazy.  And on the way back we even got to see fireworks!

Even though the experience was an overall very positive one, there were obviously a few drawbacks.  For starters, it did stop a few times.  Though never for very long, thankfully.  But I did want to mention that.

Now, our first ride was super smooth.  I was impressed by how smooth it was.  But a few other rides after was a bit bumpy.  Especially the right to Hollywood Studios because it was windy then.  So this is something to keep in mind if you have a weak stomach.

Also, I will say that while some of the views were great (like the Caribbean Resort), others really weren’t.  I kind of expected that, though, from when I saw the gondolas first go up at the parks.  Basically, for part of the ride to Epcot you just see traffic.  But that’s like the monorail ride to Epcot, too.

The other thing I wanted to point out were the gondolas themselves.  When I first read that there would be some designed with Disney characters and some not, my first thought was I hope I get in a Disney character one!  After all, I love all things Disney.  But after riding them, I think the experience is actually much better in the ones that aren’t themed to Disney.

Now, if your gondola had no Disney characters, you had clear windows.  You could get great views of the Caribbean in particular.  Now, I tell you this just as an observation.  Because you can’t pick your gondola.  But it is something I found interesting.

Is Disney Genie Plus Worth It?