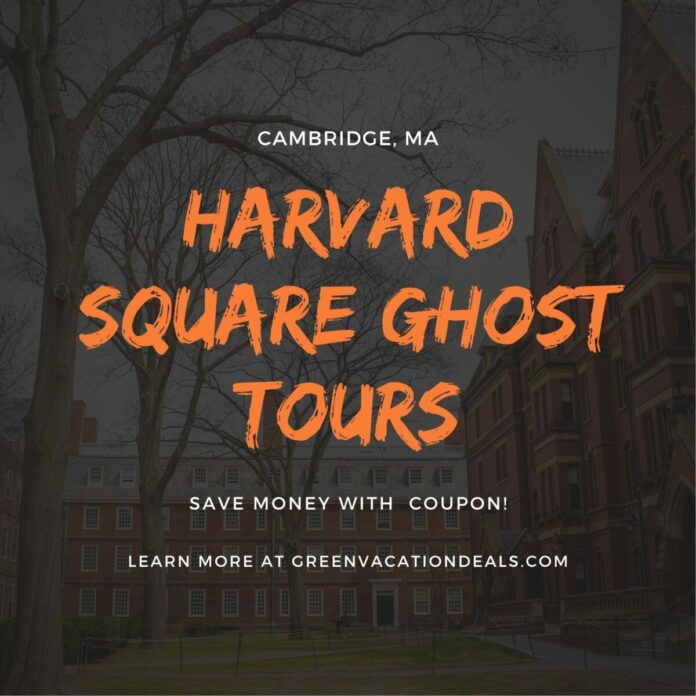 If you feel a chill creeping up the back of your neck, it may not just be the cool, crisp autumn air. If you feel like someone is watching you, you may just be right.

Take a 90-minute walking tour of Harvard Square and hear chilling tales of its haunted heritage.

You’ll meet at the Harvard Coop at 1400 Massachusetts Avenue. Follow the glow of lantern light as your guide in period costume through these historic streets.

Your tour will take you to various buildings in Harvard Yard and you’ll learn about the history of the university.

Wadsworth House is Harvard’s second oldest surviving building and is referred to as “The President’s House.” In 1775, the house was the temporary headquarters of General George Washington and General Charles Lee. Your guide will tell you of the apparitions that have been seen there over the years.

Massachusetts Hall is the oldest surviving Harvard building. In its almost 300 years, it has served as a dormitory, an army barracks, a lecture hall, an observatory and administration offices. Hear stories of spirits that are reported to be residing there and walk through walls.

Thayer Hall is a freshman dormitory built in 1870. Many have reported seeing apparitions in Victorian garb in this dormitory.

You’ll hear of people dismembered and bludgeoned to death. Learn about the public executions in Cambridge Common. Most of them were executed by hanging, although one woman, convicted of murder, was burned at the stake there.

You’ll see Peets Coffee. It was the site of the old jail. It held many who were later executed. Unfortunately, some of those were not guilty.

Your tour will end, appropriately, at the Old Cambridge Burying Ground. See death’s head tombstones. Your guide will tell you about the paranormal activity that has been going on there for centuries.

Are you looking for a way to save money on this ghost tour near Boston? Click here and you can save $11 (44% discount) on each ticket.

4 Star Barcelona Hotel for Under $100

Win a Surf Trip to Hawaii

4 Star Hotels In Atlantic City Under $100

Coupon For Whale & Dolphin Watching Cruise From Cape May New...

Win A Trip To New York City OR Los Angeles