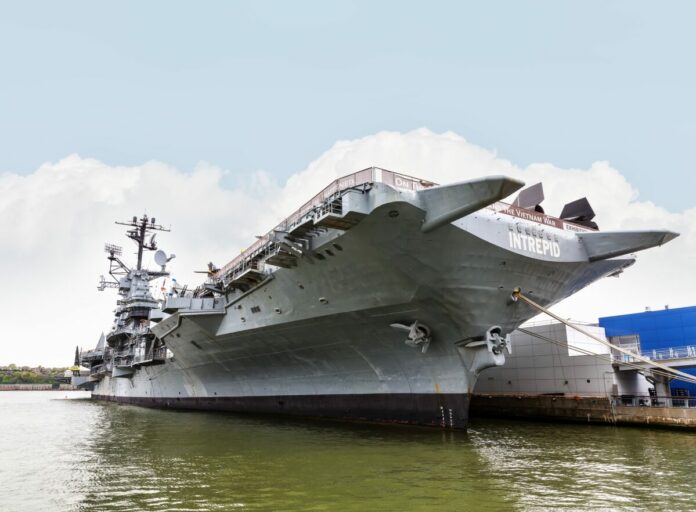 Intrepid Sea, Air & Space Museum in New York Science is a museum dedicated to history, science, and service.  It is a very unique museum.  Most of its exhibits are inside the hangar & on the decks of Intrepid.  The Intrepid is a military aircraft carrier and it is a National Historic Landmark.

Today I want to tell you about the different exhibits and activities you can do at the Intrepid Sea Air & Space Museum.  And then I will tell you how you can save money with a discounted ticket!

The aircraft carrier Intrepid has a fascinating history.  It first launched in 1943.  It fought in World War II.  The Intrepid actually survived five kamikaze attacks and one torpedo strike!

Intrepid wasn’t done with its military service then, though.  It served in both the Cold War and the Vietnam War.  Additionally, it served as a NASA recovery vessel in the 1960s.  Intrepid was finally decommissioned in 1974.  Ever since then, it has been on the Hudson River.  And now it serves as the centerpiece of the Intrepid Sea, Air & Space Museum.

The Hangar Deck is a great place to start your visit to the Intrepid Sea, Air & Space Museum.  You’ll get to see the fully restored Fo’c’sle, the forward-most part of the ship.  You can also explore the anchor chain room.  Another great place to check out is the dormitory-style accommodations for junior officers as well as the two-man staterooms for higher-ranking officers.

The hanger deck is also home to the Exploreum.  This is a fully interactive exhibit space that adults and kids will enjoy.  Highlights include steering the wheels of an airplane and climbing in an actual Bell 47 helicopter.

The hangar deck is also home to the exhibit Kamikaze: Beyond the Fire.  This includes firsthand accounts and artifacts from the United States and Japan.

And you’ll learn even more about the Intrepid if you watch The Story of Intrepid Movie, an 8-minute film.

Going to the Flight Deck gives guests the chance to get an up-close look at more than 2  dozen authentically restored aircraft.  You also get to look inside the Restoration Tent and walk on Intrepid’s island and bridges.

You’ll find the Gallery Deck in between the flight deck and hangar deck.  You can go here to see the combat information center (CIC), the squadron ready room, and marine berthing.

The Third Deck is a great place to go to learn more about ship life.  You can do that in the Intrepid’s restored galley, enlisted mess, and crew berthing.

Another highlight of the Intrepid Sea Air & Space Museum is seeing the space shuttle Enterprise.  This was the prototype NASA orbiter.  It paved the way for our nation’s successful space shuttle program.  The Space Shuttle Pavilion has 17 exhibit zones.  They feature original artifacts, audio, films, and photographs, audio, and films.  This helps you really learn a lot about the science and history of Enterprise as well as the space shuttle era.

Growler is the only American guided missile submarine open to the public. It first debuted at the Intrepid Sea Air & Space Museum back in 1989.  Visiting here gives you a firsthand look at life aboard a submarine.  You also get a close-up inspection of the once “top-secret” missile command center.

The fastest Atlantic Ocean crossing by any Concorde happened on February 7, 1996.  You’ll get to see the Concorde that achieved this feat, the Concorde Alpha Delta G-BOAD, as it is on display at the Intrepid Museum’s Pier 86.

So about that discount ticket!  Click here and you can automatically save on adult and children’s tickets.  No coupon code or promo code is even needed!

Win A Trip To Malibu California

Save on Monster Ball 2018 in New York City