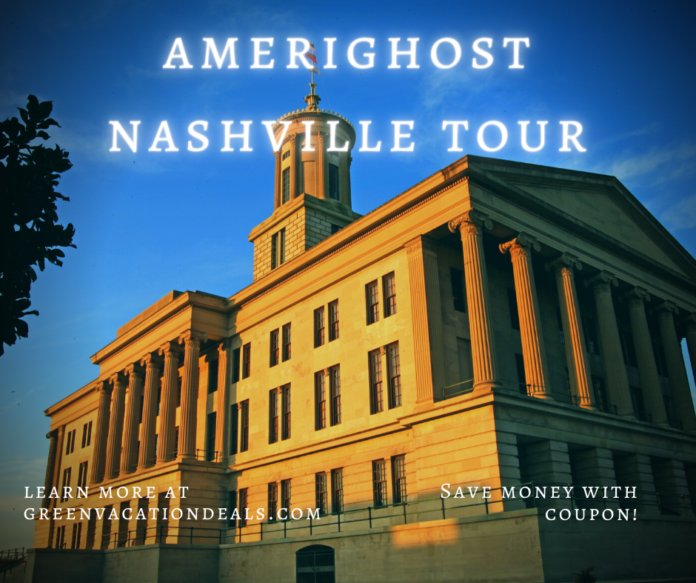 Hear chilling tales while taking a walk through Nashville’s history. AmeriGhost Tours will take you to the most haunted sites in Nashville. Follow your costumed guide on the lantern lit 90 minute tour and delve into the dark past of this beautiful city.

All the guides have a gift for story telling and a vast knowledge of Nashville’s history. You’ll hear spooky stories you’ll remember for years to come. All of their stories have been thoroughly researched and well documented.

Stops on the Tour

At the turn of the century, Printer’s Alley was home to 2 major newspapers, 10 print shops and 13 publishers and that’s how it got its name. During Prohibition, nightclubs moved into the alley. They sold alcohol and the police and elected officials looked the other way.

David “Skull” Schulman opened the Rainbow Room in Printer’s Alley. It was frequented by celebrities, including Elvis, Paul McCartney, Johnny Cash, Willie Nelson and many more. In 1998, “Skull” was murdered during a robbery.

Since his death, many people have reported seeing him in Printer’s Alley walking his poodle. Cold spots are common occurrences during paranormal activity. These cold spots have been reported by many in the building that once housed “Skull’s” Rainbow Room. Is he still there?

Hear more about “Skull’s” life and afterlife. Your guide will also tell you of other instances of paranormal activity in Printer’s Alley.

You’ll see the Tennessee State Capitol which is one of Nashville’s most prominent example of Greek Revival architecture. Hear stories of deceased individuals who’ve been seen and heard in the Capitol. President James K. Polk and his wife are buried in the Capitol grounds. Many people have reported seeing a man in a dark suit at the gravesite. The man slowly disappears as people approach him. Is he President Polk?

You’ll see Ryman Auditorium which was the original site of the Grand Ol Opry. The Opry was held there until 1974. Your guide can tell you about the Opry Curse and of all the Opry performers whose lives were cut short by wrecks, fires, ODs, accidents and more. You’ll also hear about paranormal activity that has been reported in Ryman Auditorium.

This walking tour is a fascinating, fun and educational way to experience the city of Nashville.

Save on Mystic Dunes Resort & Golf Club in Orlando

Save up to 75% off Florida Hotels