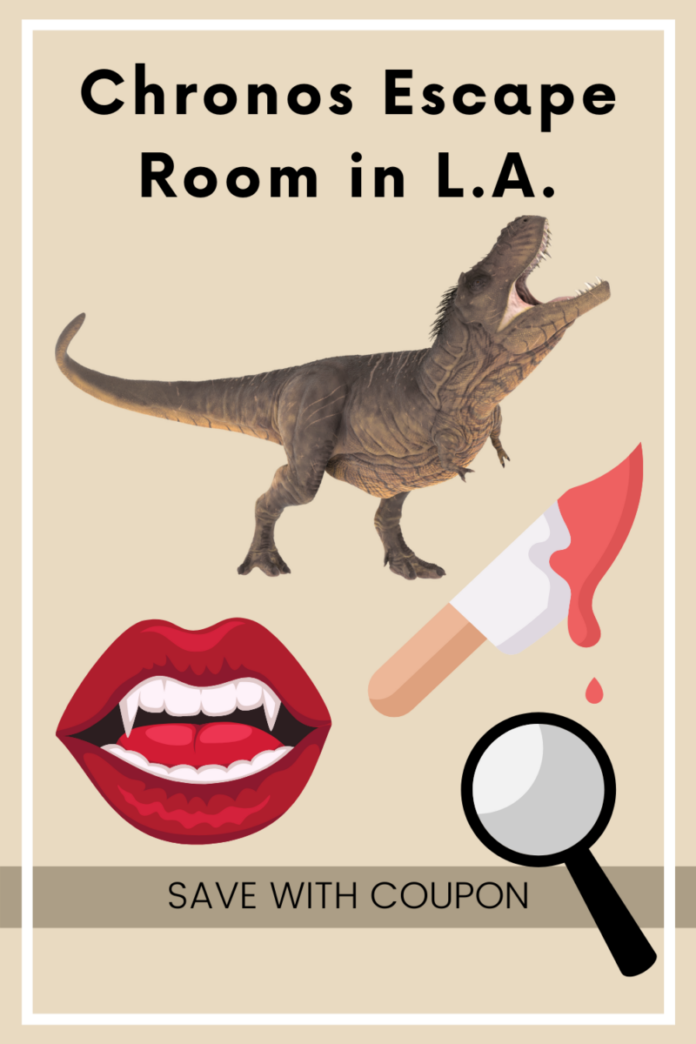 Are you looking for a good escape room experience in the Los Angeles, California area?  Then check out Chronos Escape Room in Pomona, California!  It is a wonderful group experience.  You and your friends, family, and/or co-workers can work together to find clues and solve puzzles.  And, of course, you’ll need to figure out how to escape the room in sixty minutes.

I’ll tell you about some of the escape rooms available here.  And then I’ll tell you how you can save money on your admission!

It is the year 2098.  Dream sharing technology is a thing now.  In fact, it is a medicine that is used to treat patients with mental disorders.  But now you and your team of the best engineers have been hired to operate the machine.  You are to bring a very important figure who is unconscious back to reality.  And that is when it gets interesting…

The plotline behind this escape room is that you and your group are researchers who were hired to return to an island after an incident that happened years ago that caused it to shut down.  But your sources tell you that one of the main incubators in the hatchery is still alive.  And not only that, but it is keeping a nest of Velociraptor eggs alive!

Now, you’ll need to retrieve one of these eggs so your employers can start rebuilding the park.  You have made it to the main building.  But not the EVAC crew has told your team that you only have sixty minutes to get the egg before an incoming monsoon.

You and your group are vampire hunters in this escape room challenge.  And while you are on a quest through a dark forest, you lose your way and find yourself in a village.  The villagers there are so nice and friendly that you decide to stay the night.

But there’s one problem here.  It turns out all the villagers are actually members of a cult that worship the “blood thirsty shadow”.  So they lock you up in a dungeon below his chapel.  You’ll be sacrificed.  Unless, of course, you can make your way out!

Voyage of the Sea Serpent

Climb aboard the mighty Sea Serpent where you will be sailing under the ruthless Captain Grim.  As a newbie, you’ll start with some odd jobs around the ship before you can chart a course or even fire the cannons.  But they are setting sail immediately as soon as the ship is loaded up with treasure.  Just be on the lookout for pirates…

In this escape room experience, you and your friends are a group of urban explorers who have decided to explore an old abandoned high school in your town.  But unfortunately, you did not know that this is the playground of the infamous serial killer Freddy.  He murdered his classmates several years ago.  Now you are his latest victims. Can you survive before time runs out?

The good news?  The Ice King has been defeated.  The bad news?  The seven realms of the West continue to wage war.  Not only that, but you’ve heard whispers from the three-eyed raven that a new Ice King will rally the remaining Night Stalkers and continue their evil quest for mankind’s destruction.

So now it is up to you, since you are the bravest knight in all of the realms, to prevent the prophecy from coming true.  You need to find that new ice king and put his reign to an end.

The story behind this escape room is that you and your friends are on an overnight hike.  You end up getting lost in the woods.  And now you find talking animals trapped in a bird’s cage!

These animals explain to you that you are also now trapped in a magic dimension from a broken portal.  In exchange for helping free them, they will help you get a key from the goddess in the castle so you can return to your world before the portal closes.

This escape room is set in New York City in 1943.  Behind the glitz, glamour, and excitement of the city are dark powers at play.

You see, you have recently joined the Tri-State Trio Mafia.  But unfortunately, an undercover detective is threatening to put the entire organization behind bars.  So now it is up to you to find all his evidence and destroy it before the police catch you!

Looking for a promo code to help you save money on admission to Chronos Escape Room?  Well, I have a great one that is available for the Inception escape room!  You just need to click here and you can save up to 33% on your ticket.  The ticket gives you admission to an Inception Private Game for 8 People, valid any day.  Act now while you can take advantage of this great deal!

How To Get A Free Trip To Disneyland