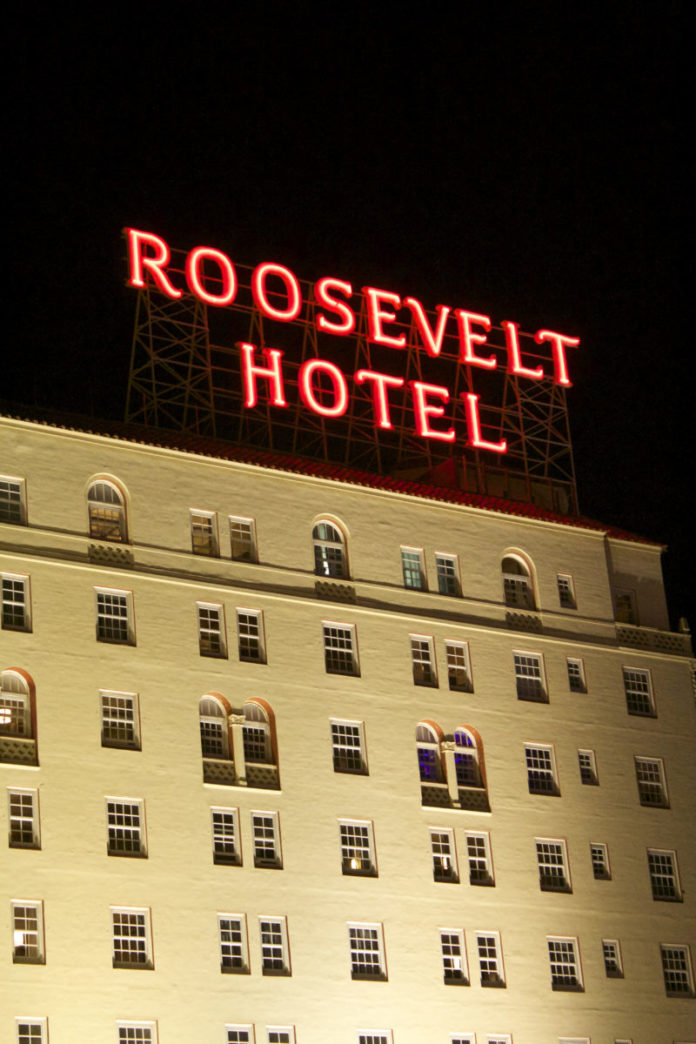 You’ll meet your guide at the Sweet! Hollywood candy store in the Hollywood & Highland Mall.

Walk past theaters, boutiques, the Walk of Fame, restaurants, and Grauman’s Theatre while hearing stories of aspiring actors and movie stars and their spirits that are still with us.  Your guide will tell you about the murders, mayhem, cursed places, hauntings, gruesome crimes, tragedies, and eerie happening in Tinsel Town.

You’ll visit the historic Roosevelt Hotel.  Opened in 1927, it was named for President Theodore Roosevelt.  Its steeped in the stories of Hollywood and its stars.

The first Academy Awards ceremony was held in the Blossom Room in 1929. The tickets cost $5.  Since then, there have been numerous reports of a man dressed in a tuxedo who appears and then disappears.  There has been speculation that he was a disappointed nominee.  There have also been reports of people who hear someone playing the piano in the Blossom Room.  When they enter the room they see a man at the piano wearing a white suit.  As they approach, he disappears into the air.

Marilyn Monroe lived in Suite 1200 and, according to many people, her spirit remains in the suite.  There have been numerous reports of people looking in the mirror and seeing a sad blonde woman.  They realize it’s Marilyn and turn around and there’s no one there.

Montgomery Clift lived in Room 928 while filming “From Here To Eternity.”  Guests have reported seeing a shadowy apparition pacing the hall in front of the door to 928.  Others have heard a man’s voice reciting lines or playing a trumpet when no one is there.

Many people have reported seeing the ghost of Carole Lombard floating around the upper floors.  There have been many sightings over the decades of a little girl in a blue dress looking for her mother.  There apparently are different entities in the hotel who like to lock people out of their rooms.  Many guests have reported hearing the sound of stomping boots when no one is there.

You’ll also hear about the secrets of the Magic Castle and the ghostly occupants that are said to haunt the castle.

Most visitors want to see and take pictures of the HOLLYWOOD sign.  Failed actors and actresses, spurned lovers and people racked with guilt are attracted to the sign and go there to commit suicide.  Learn about the actress whose spirit returns to reenact her death over and over again.

Learn about the historic El Capitan Theatre and its resident spirits.  And hear the story of the mystery of the Black Dahlia that has fascinated people for over 70 years.

The tour even stops at a haunted bar so you can enjoy some spirits before hearing about some more.

Be sure to bring a camera.  Who knows – you might capture an orb or an apparition in your photos.  You can also bring an EMF meter and ghost hunting equipment if you like.

Win a Trip to the Frozen 2 Movie Premiere in Los...