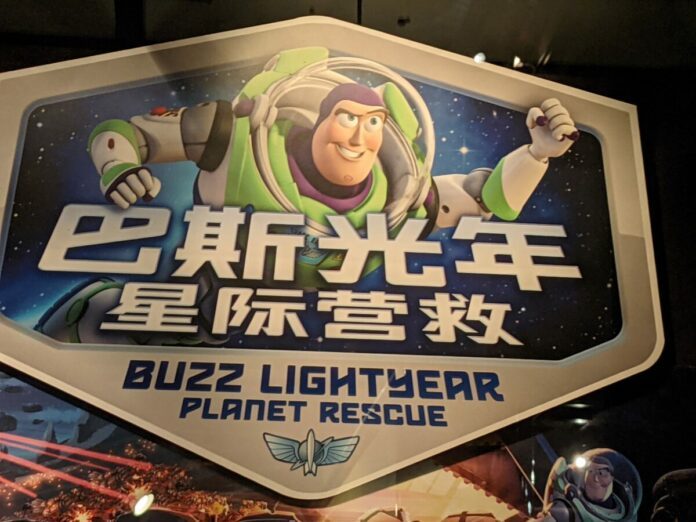 Today we’re going to take a look at Buzz Lightyear Planet Rescue, an interactive shooting ride in the Tomorrowland section at Shanghai Disneyland. And then we’ll let you know how you can get Shanghai Disney tickets, so you can try out the ride for yourself!

This ride is actually part of a series of Buzz Lightyear shooting rides at the various Disney theme parks across the world:

*The Buzz Lightyear attraction in Hong Kong Disneyland was later replaced with the Ant-Man and The Wasp: Nano Battle! ride. Although the theming and story is different, this new attraction uses the same ride layout and omnimover ride system.

The original ride, which opened in Magic Kingdom in 1998, did not only lead to additional Disney rides. It also inspired similar shooting rides in non-Disney parks, like Men in Black: Alien Attack at Universal Studios Florida and Justice League: Battle for Metropolis at Six Flags.

The story behind Buzz Lightyear Planet Rescue involves some of the characters from Toy Story. Specifically, it involves Buzz Lightyear (obviously) and his arch nemesis, the Evil Emperor Zurg.

Zurg has a crystal powered Superblaster, which he hopes to use to demolish the Space Aliens’ planet.

The mission of the guests, then, is to take down Zurg’s guards and eliminate his super weapon. And you’ll do this using the laser blasters mentioned earlier. Look for the Z’s, as they indicate the targets you’ll want to hit. On your way out of the ride, you’ll see a scoreboard listing the different rankings you can get. Each ranking corresponds to your score, which was earned by hitting targets. The higher the score, the better the ranking.

As the Shanghai Disneyland version of the ride is newer, it’s not surprising that it is also a more modern version.

The queuing area, for example, resembles the International Space Station and is longer. And the explanation given for how the ride works feels more current.

Once on the ride, instead of the round-shaped targets you’d see in Magic Kingdom, there are screens, which make it easier to see if you’ve hit it or not. The set objects interact with what’s happening around them, and Buzz flies around on screens and fights bad guys during the ride. And on the ride vehicle, your score is displayed on a screen (instead of a calculator-like counter).

Additionally, the ride in general is more closely based on the opening scene of the 1999 movie Toy Story 2, which involves the Buzz Lightyear video game.

You can see for yourself what the ride is like with this video:

Is a video not enough? Want to experience the ride firsthand?

Click here for a variety of ticket options. You can choose between a 1 day ticket, 2 day ticket, 1 day ticket that includes a food package, and even annual pass options.

If you want to find out more about all of the rides at Shanghai Disneyland, we recommend this book, which was a helpful resource in writing this.