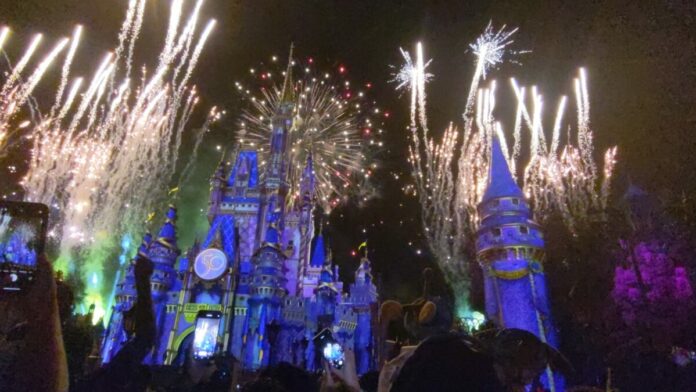 And this milestone was not lost on Disney.  A lot of new things debuted at the park.  We talk about our favorites here:

Some of the new attractions include new restaurants (Space 220 & La Creperie de Paris), a new ride (Remy’s Ratatouille Adventure), and new food in the parks.

But today I want to talk about the new nighttime spectacle at Magic Kingdom!

It replaces Happily Ever After.  If I am going to be honest (and of course I should in a review!), Happily Ever After is my all-time favorite fireworks show at Magic Kingdom.  So Enchantment had a lot to live up.

The fireworks themselves at Enchantment were amazing.  There were so many beautiful fireworks that worked well with the show.  So if you want to see some great fireworks, this is definitely an amazing show! 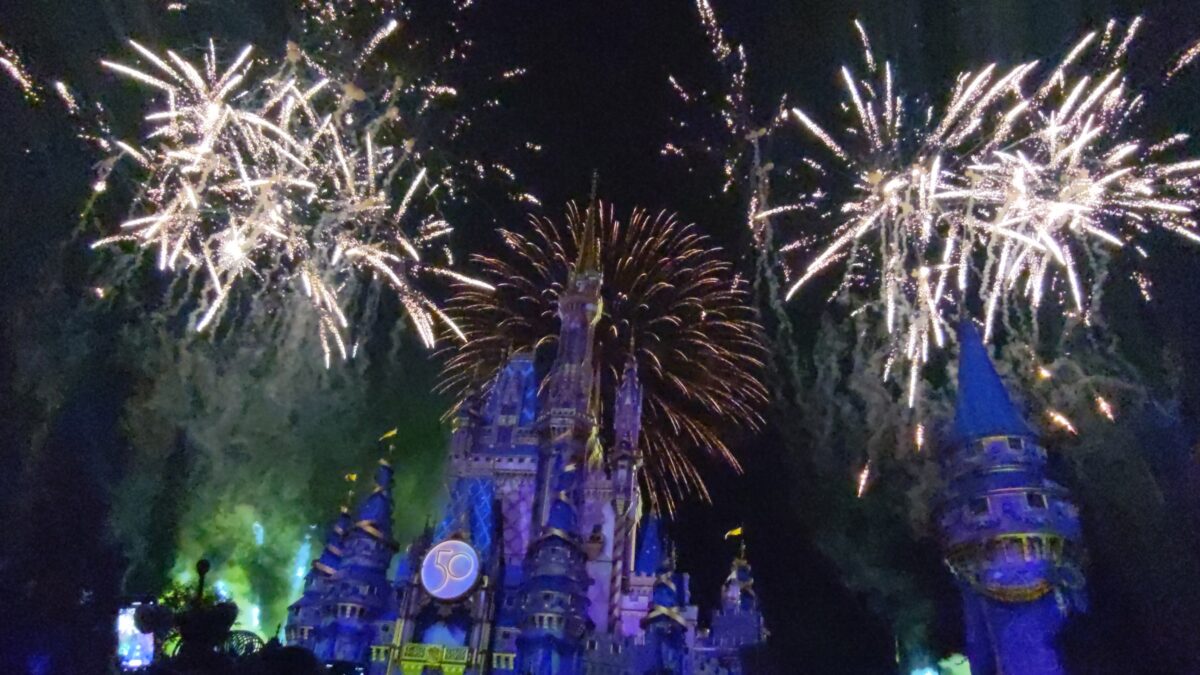 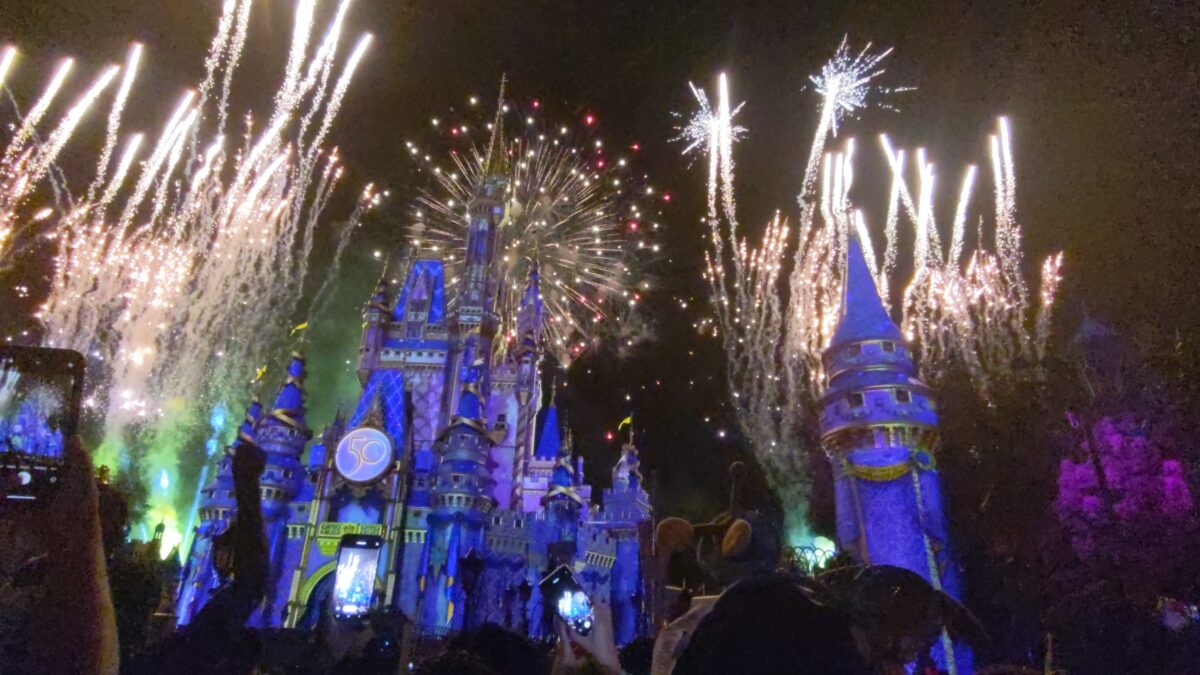 So if you were lucky enough to see Happily Ever After, you know that it featured amazing projections on Cinderella’s Castle alongside the fireworks.  They often coincided with the music playing.  It really took the fireworks show to all-new levels.

I will say, though, that the projections were a bit repetitive character-wise.  It felt like every other second, they were showing us Moana or Coco again.  I didn’t really mind it, but I suppose if you have a deep hatred of either character, this would probably hurt your enjoyment of the show.

If you’ve never seen a Magic Kingdom fireworks show, here are some pictures of the projections you’ll see to give you a bit of idea of what is in store. 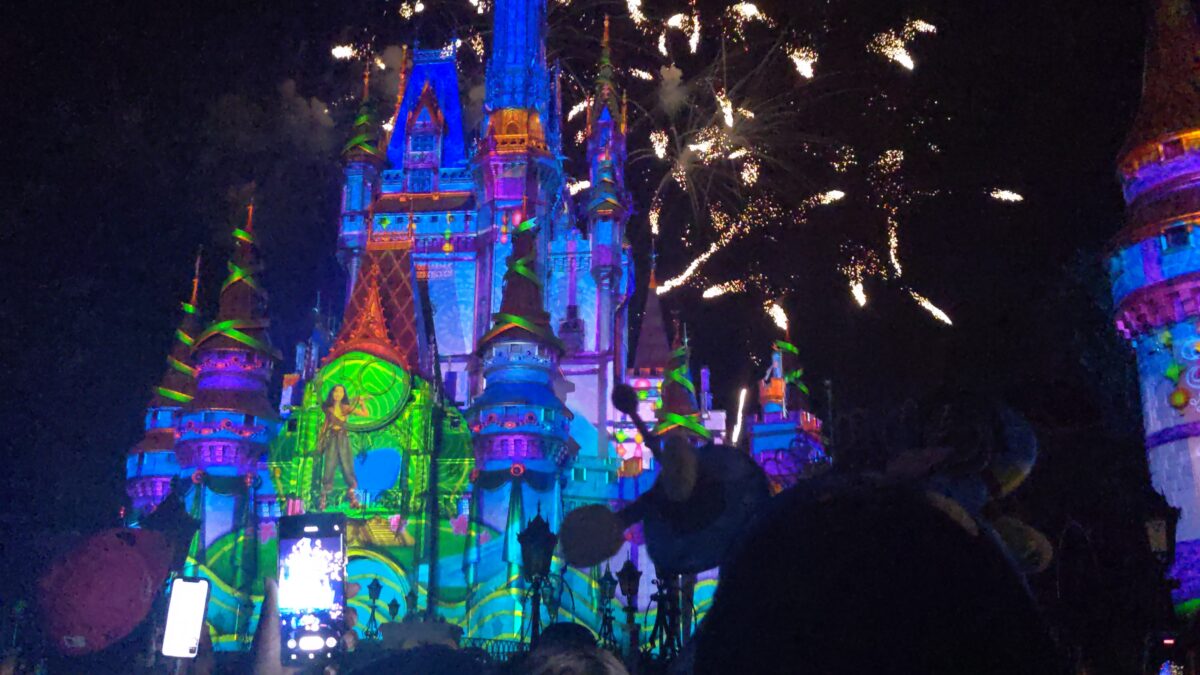 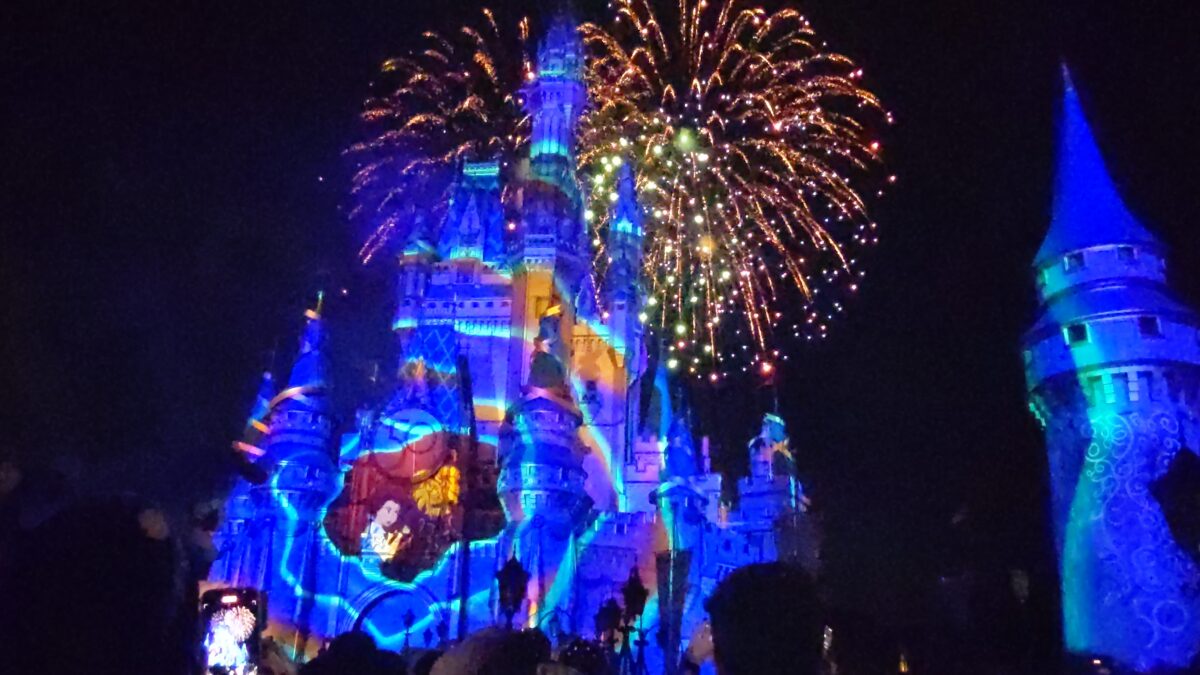 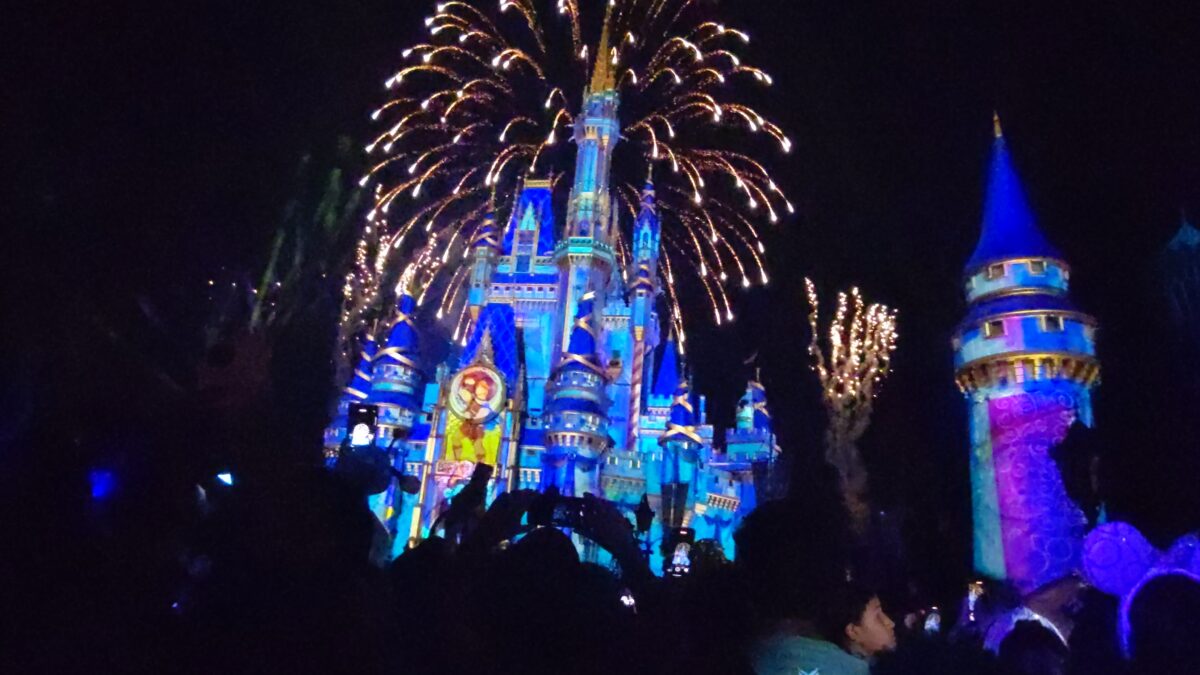 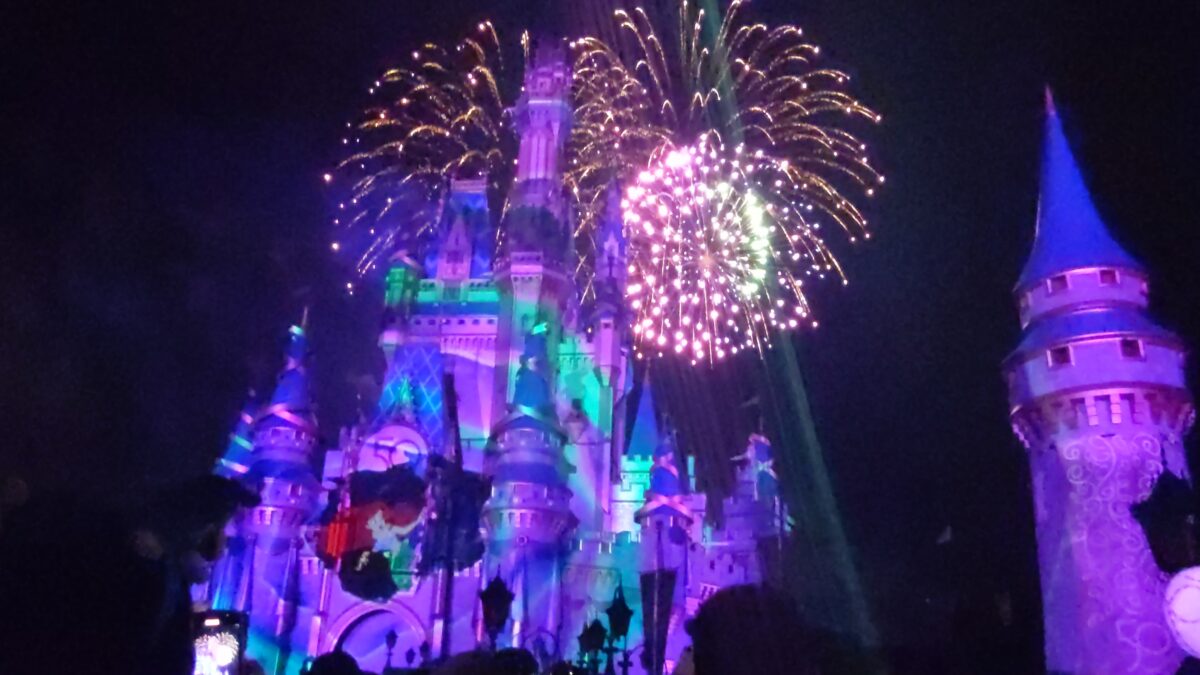 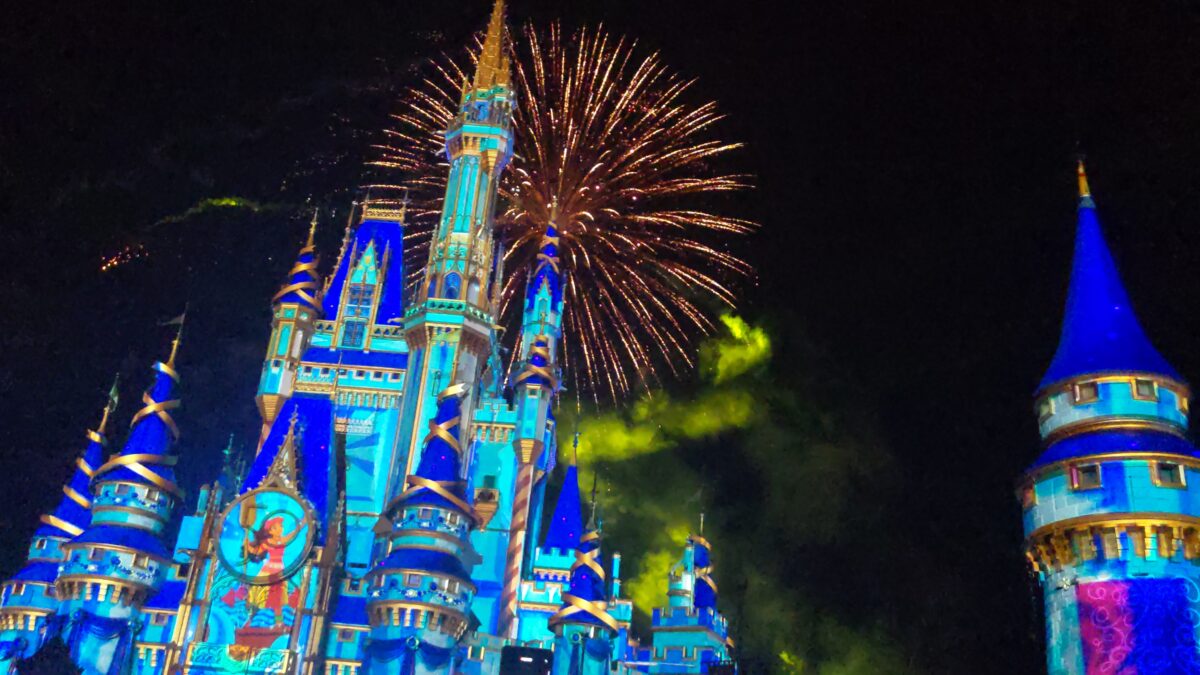 I think the theming of Enchantment was something about the magic that lives inside you.  Or something.  It honestly didn’t have much of a theming.  I much preferred Happily Ever After, which to me more or less told a story alongside showing the fireworks.  But there never really felt any rhyme or reason for which song they would play and characters they would show.  It just more seemed like a bit thrown together.

But this is not to say it is bad, of course.  I know, for example, my mother says she doesn’t care if a fireworks show tells a story.  I mean, if you are there for the fireworks or seeing cool projections, then you are not going to care about the storytelling aspect.  But for me, personally, it was something I missed a bit about Happily Ever After.

Disney has a lot of great music.  They played some of that during the fireworks show.  Although I have to say, they mostly stuck to some songs from newer movies than the classics, which is a bit of a head-scratcher since this was a firework show that debuted at the fiftieth anniversary.  It kind of seems like that this of all times would be the time for nostalgia.  And I like a lot of the music from the new movies.

Another odd thing about the music is that it wasn’t always the original singers.  It was often recorded by new artists.  Which, to be perfectly honest, is kind of a disappointment because I generally prefer the versions of songs from the movies.

But I will say, I did enjoy the show and it made me feel like a lot of the music better.  I now find myself randomly singing the song “Into the Unknown” from Frozen 2, which before Enchantment, I never had sung anything from that movie.

If you loved seeing Tinker Bell fly in Happily Ever After, don’t worry.  She flies during Enchantment, too!

So my review may have seemed a bit negative to this point.  But I just wanted to give you all my thoughts.  So if it made you think I didn’t enjoy the fireworks, then I have to say that actually isn’t true.  Honestly, I loved the whole experience.  I waited for about an hour in front of the castle to get a good view.  I don’t love waiting, but the whole experience was a lot of fun.  Everyone around me also really enjoyed the fireworks.  It made for a really exciting atmosphere.  I was sad when it was over.

So just because I enjoyed Happily Ever After more doesn’t mean I didn’t love this show.  And I definitely think you’ll want to see it if you haven’t seen it yet yourself.

You can get a preview of it from the video we took of our viewing of Enchantment.

If you do want to go to Disney World to see these great fireworks, then I know you don’t want to pay through the roof for your trip!

So first, check out how to book top Disney World hotels at a fraction of the price.

And check out how to get Disney World tickets at a discount.