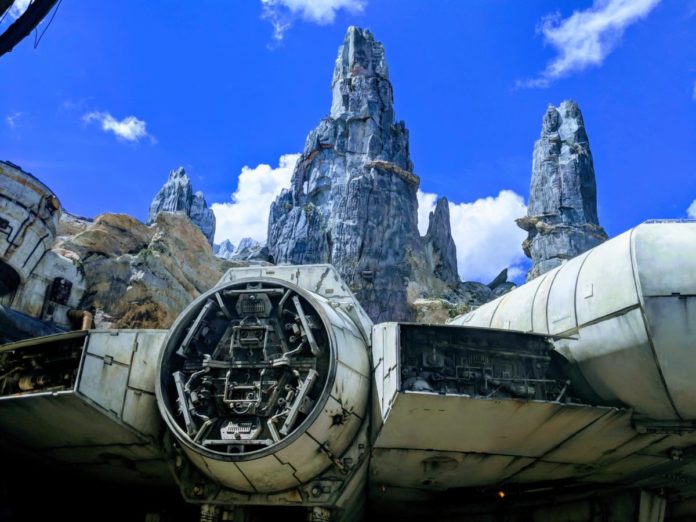 Last week, we had the amazing opportunity to see a sneak peek of the new Star Wars Land at Disney World!

So, in case you haven’t heard, Disney has been building a new Star Wars themed section of Disney’s Hollywood Studios theme park.

There is also a Star Wars: Galaxy’s Edge at Disneyland in California, but it hasn’t opened yet at Walt Disney World in Orlando, Florida.

So as usual, we wanted to share with you guys what we saw!

In this video, you’ll be able to get a great feel for this Star Wars-themed land.

If you’ve visited Pandora at Animal Kingdom at Walt Disney World, then this new land might remind you of that. And what I mean by that is that you’ll feel like you’re completely immersed into an all-new world.

In this case, you’ll be on the planet of Batuu, specifically the village of Black Spire Outpost.

In this video, you’ll see Oga’s Cantina, and see their great drink offerings and the DJ, R-3X.

You will also see the restaurant Docking Bay 7 Food and Cargo, a good place to go for food and drinks.

And check out all the great Star Wars paraphernalia for sale in the land.

You will also get to see my new favorite queuing area for a Disney World ride in the queuing area of the Millennium Falcon: Smugglers Run ride.

And make sure you’re on the lookout for Chewie and Stormtroopers!

This is just some of what you’ll see in this video.

So I know after seeing this, you’re going to want to get tickets to Disney World right away!

Click here to get great rates on Disney World tickets (and Orlando hotels, too!).

And if you’re looking at staying at one of the Disney deluxe hotels that are within walking distance of Hollywood Studios (Beach Club & Boardwalk), check this out.

You’ll be able to find out how to get really cheap rates for those hotels.