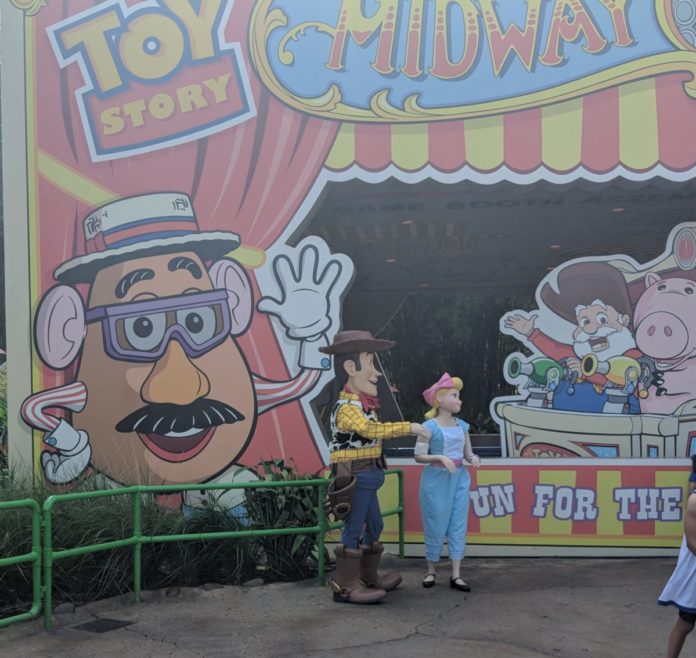 I first visited Disney’s Hollywood Studios theme park at Walt Disney World Resort in Orlando, Florida as a kid not long after it opened in 1989.  But if I didn’t know any better, I would swear that was a different park.  The theme park is almost completely different than it was when it first opened.  It even has a different name (it used to be called Disney-MGM Studios).

But through all the changes, one thing has remained.  And that is all the fun your family can have there!  It is definitely a park your family will enjoy.  You can visit it with Walt Disney World base ticket or park hopper ticket.  You can find the best prices for these tickets here.

But before you get your ticket and head to the park, you’re going to want to see how Hollywood Studios is now, right?  So we have a created a virtual tour of Disney’s Hollywood Studios.  This includes all the new additions as of September 2019.  This is a great video to watch if you haven’t been in years and you want to see how it’s changed.  It’s also a great video to watch if you’ve never been to Hollywood Studios and you want to see what it is like.  Anyone planning a trip can benefit from watching this video to help decide what they want to do – and to get excited!  And, of course, this video is great if you’re a Disney fanatic like me.  Because sometimes you just need to virtually transport yourself to the Disney parks!

So what all is in this video?  I’ll go over it here!

Next up is Sunset Boulevard.  This is where you’ll see the Beauty and the Beast – Live on Stage show.  We also stop by Rock ‘n’ Roller Coaster Starring Aerosmith and The Twilight Zone Tower of Terror, two classic thrill rides.  If you haven’t been in awhile, here’s where you’ll get your first look at Lightning McQueen’s Racing Academy.  Lightning McQueen’s Racing Academy just opened at Sunset Showcase and is a fun, family-friendly attraction based on the Cars characters.

You’ll next to get to see the beauty of the Echo Lake part of Hollywood Studios.  Be on the lookout for Gertie the Dinosaur of Dinosaur Gertie’s Ice Cream.  By the way, the ice cream there is delicious and a great treat on a hot day!  Another place to eat while enjoying the beauty of Echo Lake is Dockside Diner, which you’ll see in this video.  We check out other great nearby restaurants here, too.  You’ll see Hollywood & Vine (Disney Junior character dining), 50’s Prime Time Café (sit-down dining with comfort food in a 1950s theme) and the Backlot Express Restaurant (quick service).  This takes us to one of my favorite attractions at Hollywood Studios: the Indiana Jones Stunt Spectacular!  You’ll get to see highlights of this attraction here.

Next up during our virtual tour is Grand Avenue.  You’ll see inside one of the newest restaurants at Hollywood Studios, PizzeRizzo.  PizzeRizzo is a Brooklyn-style pizza restaurant owned by Rizzo the Rat from the Muppets.  You then get a sneak peek of MuppetVision 3D, the popular, family-friendly 4D film attraction.

Next, we’ll check out the Animation Courtyard.  Here, you’ll get a glimpse of the Incredibles Celebration that just debuted at Hollywood Studios in 2019.  We also show you parts of Walt Disney Presents, an interactive gallery and walkthrough museum dedicated to Walt Disney and the Disney company.  You’ll also get to see the Disney Junior dance parties here and the meet & greets with popular Disney Junior characters like Fancy Nancy & Vampirina.  We also stop by Star Wars Launch Bay.  And no visit here would be complete without the Voyage of the Little Mermaid!  This is a show blends human actors, puppets and special effects to help tell the story of the popular Disney film, The Little Mermaid.  A great thing about this show is that it is indoors!  It is a really great show to watch on a hot day.

After that, we’ll show you the ABC Commissary (a quick-service restaurant) and the Sci-Fi Dine-In Theater.  This is my favorite restaurant at Hollywood Studios, and we’ll even show you the glow-in-the-dark cup you can take home with you!

The next section we visit will seem really new to you if you haven’t been to Walt Disney World in awhile!  Like, it just officially opened this past weekend!  We had the pleasure of visiting, and we’ll show you the highlights in this video.  You’ll get a feel of the park’s beautiful aesthetic design.  You can see some of the shops and restaurants here, like Ronto Roasters and The Milk Stand.  A highlight of Star Wars: Galaxy’s Edge has got to be Oga’s Cantina.  You’ll get to see inside and see what a neat experience it is.  We even show you the delicious drinks you can get here!

After Star Wars: Galaxy’s Edge, we explore Toy Story Land.  Toy Story Land is one of the newest additions to Hollywood Studios.  In fact, it just opened in the summer of 2018.  But it is already easily one of the most popular parts of all of Walt Disney World Resort!  You will see why in this video.  We’ll take you through the one restaurant of the land, Woody’s Lunch Box.  You even get to see the delicious food you can get there!  We also show you the three great rides from this land: Toy Story Mania!, Alien Swirling Saucers and the Slinky Dog Dash roller coaster.  Keep your eyes peeled for your favorite characters during this section!  Spoiler alert: you may be seeing Woody, Buzz Lightyear and Bo Peep!

We end this video the way you should end all great days at Hollywood Studios: with Fantasmic!  Fantasmic! is a nighttime show featuring Mickey Mouse and so many other popular Disney characters.  There are lasers, fireworks, great music, actors and water effects.  This tour just didn’t feel finished until we included Fantasmic!

Save on Vacation Packages from Austin to Orlando