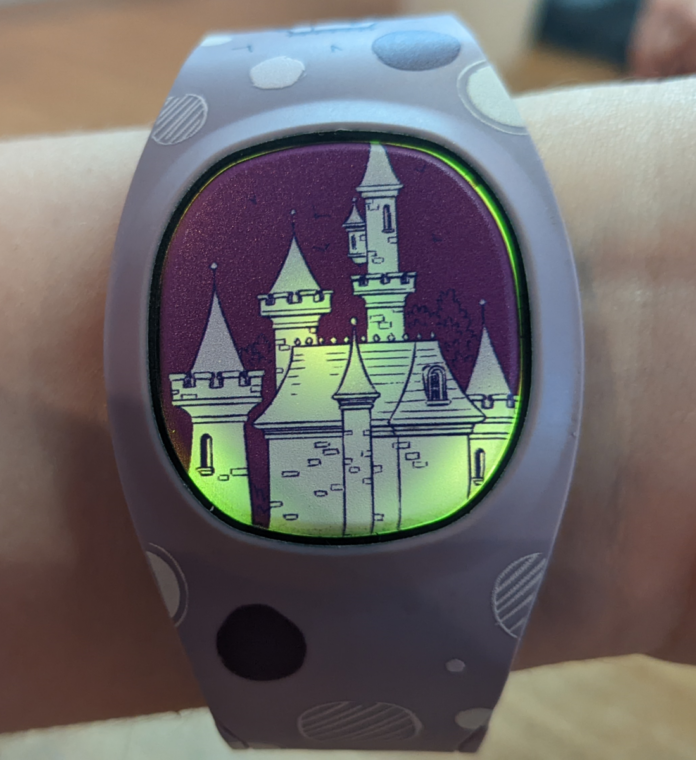 If you’ve visited Walt Disney World over the past several years, you’ve probably noticed or worn a MagicBand. These are the wristbands that allow you to get into the park, purchase items with a credit card on file, unlock your hotel room door at a Disney resort, etc.

This past summer, Disney World released the latest generation of Magic Bands, known as MagicBand+. With this new version comes an increase in price. For example, a solid colored Magic Band Plus costs about $15 more than a Magic Band without the Plus.

But is this price increase worth it?

We’re going to discuss the benefits and disadvantages of buying and using a MagicBand+. And then we’ll decide whether or not the Magic Band Plus is worth it.

Pros of Magic Band Plus

Some of the Magic Band Plus designs feature characters that you can’t otherwise get on a Magic Band. For example, Baby Groot is available on a MagicBand+ but not with a regular MagicBand. So this can be a great opportunity to get a band featuring one of your favorite characters, depending on who your favorites are.

You can see a selection of Magic Bands and Magic Band +’s here. 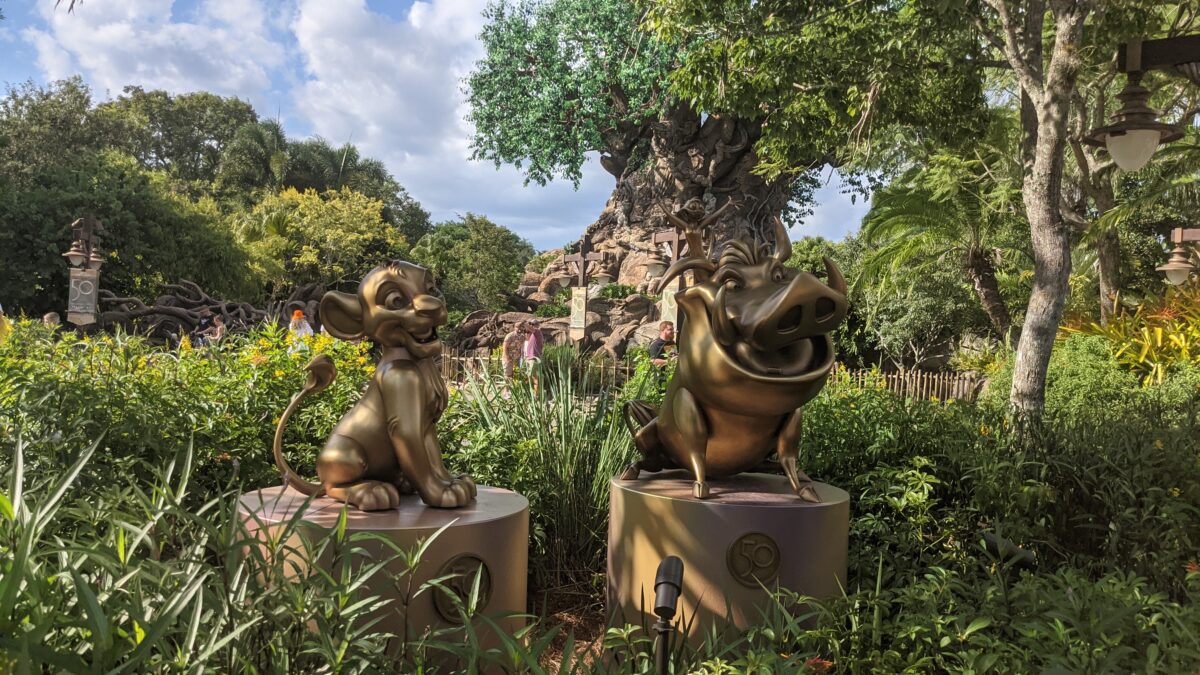 Throughout the 4 theme parks (Magic Kingdom, Animal Kingdom, Epcot and Hollywood Studios), there are a total of 50 golden character sculptures. These were added in honor of the 50th anniversary of Walt Disney World. In general, it’s fun to try to spot them all, especially when you find a statue of one of your favorite characters. But with a Magic Band Plus, you can also interact with the statue. As you approach, your band will vibrate and light up. At that point, you can wave your hand, which causes either part of a song or a spoken line to play.

I really like the idea in theory. It reminds me of using an interactive wand to cast spells at the Wizarding World of Harry Potter at Universal Studios, which is not a bad thing. But there are a few things that made this statue perk a little less fun in practice.

First of all, it didn’t always work. And I don’t think it was just me. I noticed other people waving their arms/Magic Band +’s at statues, trying to get a “reaction” (which, as far as I ever observed, was an audio clip playing).

And when one of us could get it to work, the others in our group with a Magic Band + could not. I think that might be because, apparently, if you don’t wave your hand quick enough, the opportunity times out and you should wait one minute before you can try again. I didn’t realize that until after our trip was over.

Secondly, even when it did work, I personally enjoyed some interactions more than others. For example, I enjoyed hearing Olaf talking about warm hugs more than just hearing some music play at the nearby statue of Rocket and Baby Groot. That’s just my own preference, though.

Finally, though we were visiting at a relatively off-peak time, there was a wait to get to interact with some of the statues. Having to wait at Disney World is not a new thing, but it is something to keep in mind if you’re trying to plan your day. For example, if you’re hurrying to make a dinner reservation or Genie Plus/Lightning Lane reservation, you might not have time to interact.

The center of the MagicBand+ lights up at various times. For example, when you approach one of the gold 50th statues, it will light up and vibrate. It also lights up during fireworks shows, the Beacons of Magic (such as when Spaceship Earth lights up at night), or if you double tap the middle of it.

It was fun when the Magic Band Plus would suddenly light up, but often I wasn’t even sure WHY it was lighting up. And it was kind of neat to see some color coordination with the Beacons of Magic at Spaceship Earth in EPCOT.

You can also customize the light pattern using the My Disney Experience app. For example, my 50th Anniversary Magic Band Plus has by default a 50th Anniversary Light Up Theme, which is basically the three colors of green, red, and blue. But if I wanted, I could change to a color theme that would be three shades of red, green, purple, pink, ocean blue, sky blue, etc.

Now, all Magic Bands (with or without a Plus) should be able to unlock the door of your hotel room if you’re staying onsite at a Disney World resort. However, I’ve had trouble with my previous Magic Bands, so that they either won’t unlock it at all, or it often takes several tries before it works. However, I had no problems whatsoever with the MagicBand+ unlocking my door at Bay Lake Tower or Grand Floridian.

This is an interactive experience in Star Wars: Galaxy’s Edge at Disney’s Hollywood Studios. You can use the lights and vibrations from your Magic Band Plus to find virtual bounties. Honestly, it was so hot on our trip that during our time in Hollywood Studios, we just focused on rides, shows, eating lunch, and staying indoors as much as possible. So we never ended up using our bands for this.

Cons of Magic Band Plus

Setting Up Your MagicBand+

You have to set up Magic Band Plus using the My Disney Experience app. If you order your MagicBand+ to be delivered before your trip, it’s one more thing to do at home, And if you pick it up at a Disney resort when you check in (or buy one during your trip), you’ll have to take time out of your vacation to set it up.

To set up your band, open the Disney World app and press the three little lines in the bottom right hand corner. From there, scroll down until you see the option Magic Bands and More. Choose your name, or select another guest’s name, if you manage another family member’s account and want to set up their band. Click on the MagicBand+ heading and follow the steps on the app.

I unfortunately did not time how long the set up took, but I would say it could take as little as a few minutes – if you don’t run into any problems. Of the three MagicBand+’s we purchased, for two of them we had to go through most of the steps twice because of some sort of error.

And one more thing – you can’t just set up your band as soon as you get it. You’ll need to charge it first.

Unlike regular Magic Bands, you have to charge your MagicBand+. In fact, when you first get your band, Disney recommends that you charge it until it’s at high battery levels. (To check the battery, you press the button on the back of the band, which will make the band flash one of three colors. Green means high battery, yellow means low, and red means no battery.)

After we picked up our bands at the front desk of where we were staying (Bay Lake Tower), we started charging them. After about half an hour, they were flashing green, and we were able to set them up and use them.

Now, after you get it all set up, Disney recommends that you charge your Magic Band Plus each night. We did this all except for the last night, since we knew we’d be leaving the Walt Disney World Resort the next day anyway.

The MagicBand+ comes with a 6 inch USB charging cable. Some of the more recently refurbished rooms in the Disney hotels have several USB ports for charging located around the room. Unfortunately, our room at Bay Lake Tower did not. Luckily, we had brought a charging tower we use to charge some of our devices, which made it simple to charge all the bands at once. 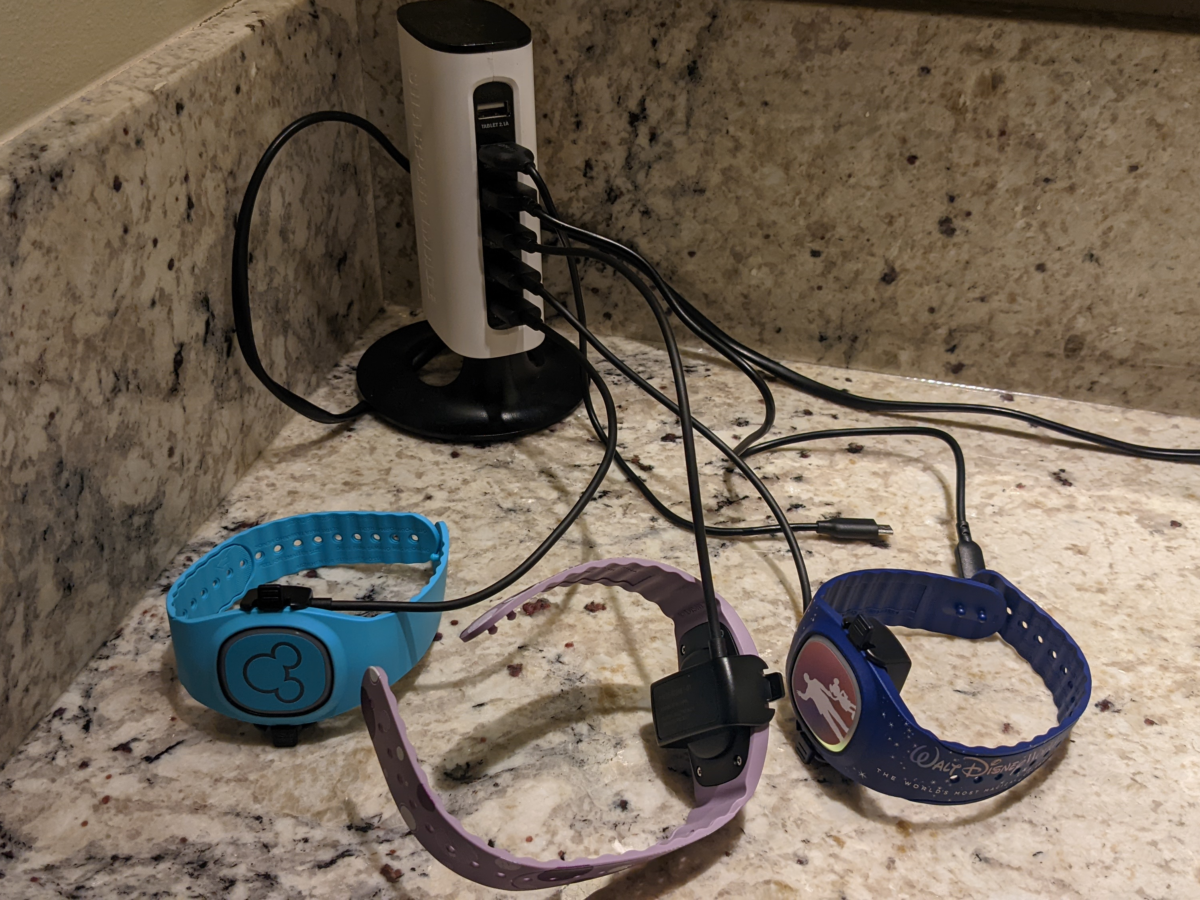 This charging tower is similar and also has 6 USB ports. If you have a lot of people or a lot of devices in your family, you could consider something with even more ports, like this 10 port charger.

I didn’t worry too much about charging our Magic Band +’s because I had a backup plan ready. If the battery of one of our bands got too low during the day, I planned on charging it back up using one of the portable chargers I bring to charge our phones during the day.

You may be wondering what happens if you don’t have access to a charger and the battery is depleted. Well, you still can do a lot of the same things that a regular Magic Band can do, such as getting into your hotel room or theme park, redeeming your Genie Plus reservations, and charging things to your room.

Many Functions are Same as Previous Magic Bands

If you have a Magic Band from a previous trip (or purchase a new one that does not have the Plus capability), you’ll be able to do many of the same things that the Magic Band Plus can do:

In fact, as we mentioned before, you can do those things with your new MagicBand+ even if your MagicBand+ isn’t charged and the battery has been drained.

Is a Disney MagicBand+ Worth It?

To recap, benefits of MagicBand+ include:

All of these pros and cons have led me to the conclusion that no, the Disney MagicBand+ is not worth it.

Obviously, there are exceptions, since everyone’s priorities are different. And perhaps Disney will roll out some cool new features soon.

But at this point, you don’t really NEED a Magic Band Plus on your Disney vacation. It’s not worth the price, especially if you already have a Magic Band from a previous trip that still works.

Also, if you order a Magic Band or Magic Band Plus beforehand when staying onsite at a Disney World resort hotel, you’ll get a discount on your band, usually about $10. The discounted Magic Bands are available for ordering even if you book your stay through David’s Vacation Club (which we love doing because it’s a lot cheaper than going through the Disney World website).

However, you don’t actually need any MagicBand at all. You can instead use Disney MagicMobile on your phone through the My Disney Experience App. Disney MagicMobile will let you access MagicBand features, like entering the theme parks. And if you just want a key to your hotel room onsite, you can ask at the Front Desk for a Key to the World card, which is a key card for your room.

5 Ways to Save at Disneyland Paris Davy Crockett Ranch