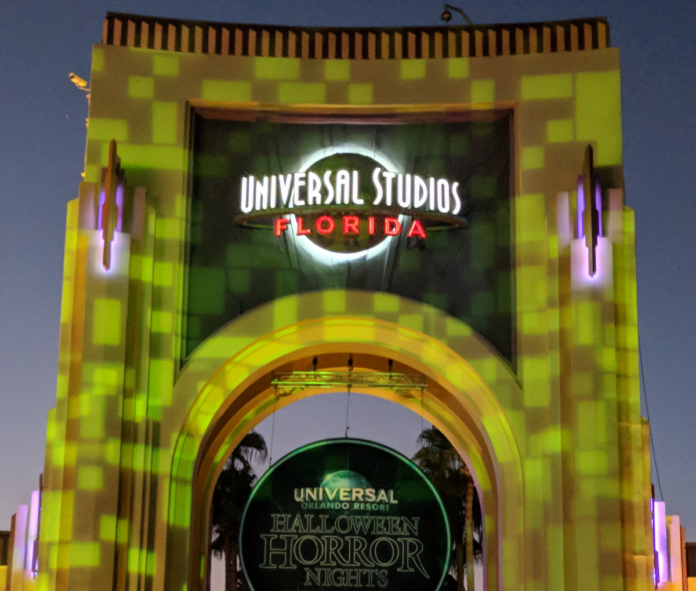 For over 30 years, Universal Studios Orlando has been the home of some of the best horror events you’ll find at any theme park. In fact, Universal Studios has received Best Halloween Event honors by Amusement Today’s Golden Ticket Awards 12 times!

What started as a weekend of Fright Nights at Universal Studios Florida back in 1991 has grown to the impressive Halloween Horror Nights event that it is today. If you love horror, gore, and being terrified, then this is the right Halloween event for you. (Speaking of being terrified, the event is not recommended for children under the age of 13. And those in the 13 and over crowd may still find it quite intense.)

In this Universal Studios Orlando Halloween Horror Nights 2022 guide, we’ll share the details of this thrilling event. You’ll find out about the best days to visit, the haunted houses, scare zones, live entertainment, tips for making the most out of your experience, and more. Plus, you can learn how to get discounted tickets to save you money on this special Halloween themed event!

Halloween Horror Nights is a separately ticketed event at Universal Studios Florida. The event is only held in the evenings on select dates. It always starts at 6:30 PM. The closing times vary, but generally it ends at 1:00 AM or 2:00 AM.

What is the best day to go to Halloween Horror Nights?

Clearly, there are a lot of options for when to go to Halloween Horror Nights. You’re probably wondering what would be the best day to visit.

If you want to avoid crowds, the best day to go to Halloween Horror Nights is a Wednesday. Thursdays and Sundays are the next best options. And it’s best to avoid opening weekend or the last two or three weeks, as those are more crowded periods in general.

The most crowded day of the week is Saturday, though Friday is very crowded as well. Again, opening weekend and then the last few weeks before Halloween are going to have the Saturdays and Fridays with the heaviest crowds.

The most popular part of Halloween Horror Nights is the selection of chilling haunted houses. There are 10 haunted houses in all. Some are based on well known horror movies and characters, while others are original concepts.

On a tour of a 1950s home of the future, you’ll be surrounded by hordes of bugs – and their slime!

Undead fishermen have appeared out of the waves. And they’re ready to seek their revenge in a New England fishing village.

Be careful as you enter the subway tunnels of a deserted New York City. There’s not much left of humanity – but there ARE hungry mutants lurking in the dark!

You and your friends get to attend a colorful fiesta in a Latin American village. Of course, the fiesta celebrates the legendary chupacabras – creatures that allegedly attack animals and drink their blood. And the blood of tourists which line the village streets probably isn’t a good sign, either.

Head back in time to Haddonfield, Illinois, 1978. This is where it all began – where Michael Myers is about to begin his first killing spree. Fans of the classic horror movie Halloween won’t want to miss this!

Go inside a prison where the inmates are no ordinary prisoners. They’re actually savage monsters! Just hope they don’t break free from their cells.

The Horrors of Blumhouse

You’ll have twice the scares (and fun) in this haunted house, which combines thrilling moments from recent horror movies The Black Phone and Freaky.

Spirits of the Coven

Beautiful flappers and a 1920s speakeasy – sounds fun, right? The only thing is, the flappers are actually witches and they’ve made you their target.

The Mummy, Dracula and The Wolf Man are scary enough on their own – but how about a battle involving all three? In this new haunted house, three legendary monsters will be on a mission to find the amulet that will break their curse. And you won’t want to be the one getting in their way!

The Weeknd: After Hours Nightmare

Fans of The Weeknd as well as horror fans will want to visit this gruesome haunted house! Encounter disturbing elements straight from a nightmare (like slashers, extreme plastic surgery, and grotesque mannequins), all set to the music of The Weeknd’s After Hours album.

While walking through the park, you can enter into 5 different Scare Zones. It’s a creative (and sometimes terrifying!) way to keep the scary fun going outside of the Haunted Houses. Basically, “scareactors” will jump out and try to spook guests. They are not allowed to touch you (and, similarly, you are not allowed to touch them) – but that certainly doesn’t mean they can’t scare you! The no touch rule also does not prohibit them from getting in your personal space.

The two live shows held during Halloween Horror Nights are also very popular. If your top priority is getting a good seat, keep in mind that the first and last performances tend to be the least crowded.

With the 10 haunted houses, 5 scare zones, and 2 shows, there’s more than enough to keep you entertained during Halloween Horror Nights. But there are still more options to take your enjoyment to the next level.

This special nighttime guided walking tour gives you Priority VIP access to the haunted houses (once per house) and participating park attractions. You’ll also get reserved seating at select event shows during your tour. And you’ll receive a special R.I.P. Tour credential, lanyard, and pin. Plus, you can enjoy a pre-tour reception in Cafe La Bamba, and access to exclusive cash bar locations.

If you like the idea of the R.I.P. Tour but want to be able to get priority access to each haunted house more than once, consider taking this Private R.I.P. Tour. In addition to everything you get with the R.I.P. Tour, you will receive unlimited VIP entry to houses with your tour guide. And while the R.I.P. Tour will include multiple parties in the same tour, the Private R.I.P. Tour is just for you and your group (up to 10 people). You’ll also get the My Universal Photos 3-Day photo package, with the first day being the day you take the tour.

Behind The Screams: Unmasking the Horror Tour

This tour is different in that it’s actually a daytime tour. You aren’t required to have theme park admission or event admission (and it’s not included in the tour, either). On this tour, you get a lights-on look at some of the haunted houses. You can either take a 3 house tour or a 6 house tour. The informational walking tour also includes the opportunity to photograph select rooms in select houses.

While the lights will be on, there is still an, as Universal describes it, “intensely graphic nature” of the haunted houses. Therefore, the tour is not recommended to children under the age of 13 years old.

In recent years, Universal hotel guests have been able to enjoy a special Pop Up Experience at Cabana Bay Beach Resort.

Here’s a video of the 2019 Pop Up, themed to the TV series Stranger Things:

Special 2022 Halloween Horror Nights merchandise will be available throughout the park.

The Tribute Store, in the New York part of Universal Studios Florida, will feature Halloween themed merch in the fall. And make sure to stop by All Hallows Eve Boutique at Universal’s Island of Adventure theme park. It’s another great location to find Halloween and HHN themed merchandise. You can find the store near Doc Sugrue’s Desert Kebab House. 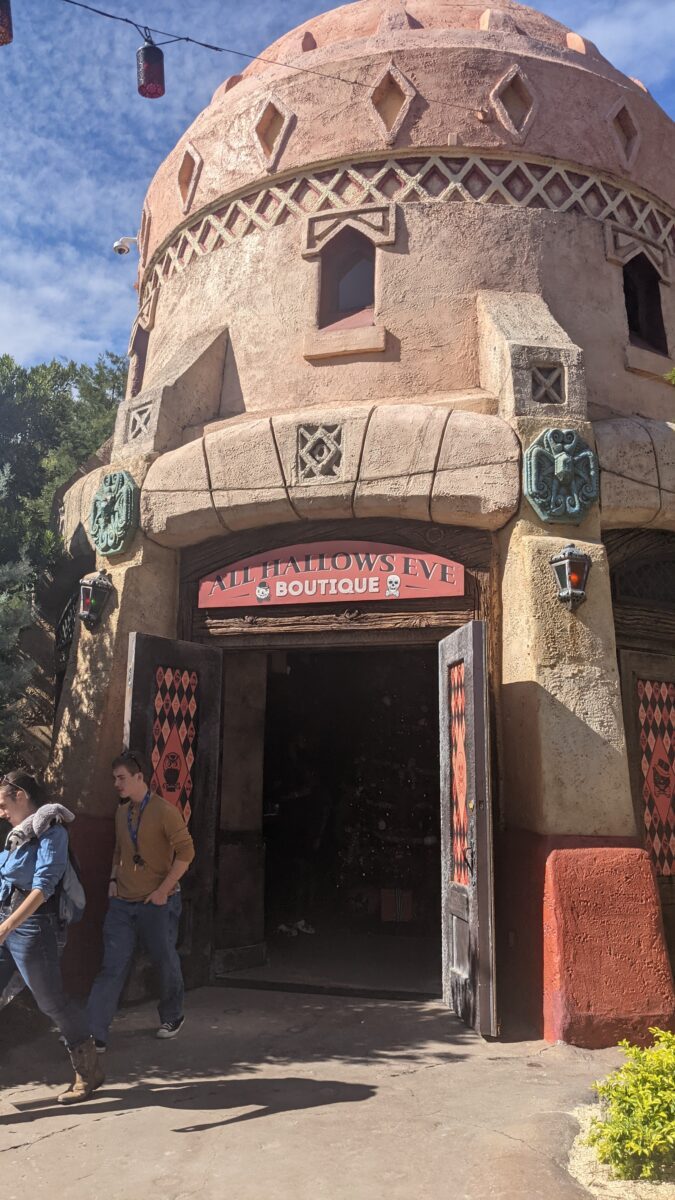 During the event, you can find food – and plenty of alcoholic drinks – at select dining locations. Specialty food and drinks are themed to the 2022 haunted houses.

What’s a theme park without rides, right? At Halloween Horror Nights, not only can you enjoy spooky experiences, but you also can ride some of your favorite attractions.

Typically, the following rides remain open during the event:

If going on rides is important to you, don’t wait until the end of the night to do it. Some of the rides will close up to two hours before the end of the event.

You may still be wondering, can I get a discount for Halloween Horror Nights?

If so, don’t worry! I haven’t forgotten about that!

If you’d like to save money with discount tickets to Halloween Horror Nights in Orlando in 2022, then click here. You can get 43% off a single night ticket for HHN!

Please note: if you’ll also be in Southern California during the fall, click here to learn more about how to save money on tickets for Halloween Horror Nights at Universal Studios Hollywood.

Although it’s a Halloween themed event, guests are not allowed to wear costumes or costume masks. (You can still get into the spirit with one of these fun HHN themed shirts!)

Make sure to check the weather on the day of the event. Fall weather in Orlando can be extremely hot, but nighttime temperatures can sometimes be chilly.

As mentioned earlier, the event officially starts at 6:30 PM. However, gates often open early – up to 30 minutes early. To be among the first ones through the gates, you’ll want to be outside the gates somewhere between 5:00 and 5:45 PM, depending on how crowded you think the park will be that night.

Note: If you’re staying onsite at a Universal Orlando Resort hotel, then look for the dedicated entrance for hotel guests. It should be on the left side. You can save money on a Universal Resort hotel stay by clicking here. To find out more about the hotels at Universal Orlando, check out the following hotel reviews and videos:

And if you do want to take advantage of this early entry, you can get discounted park tickets here.

If you’d like a more kid-friendly Halloween event for your fall Orlando vacation, we recommend SeaWorld Spooktacular. Unlike HHN and Howl O Scream, admission to SeaWorld Spooktacular is actually included in park admission. So not only is it a fun, family friendly event, but it’s a great value, too!

And while it is for an additional price, Mickey’s Not So Scary Halloween Party in the Magic Kingdom at Disney World is also a fun option if you’re looking for a Halloween event appropriate for children.

If you’re interested in learning more about the Universal Orlando Resort in general, we highly recommend this travel book. It was very helpful in writing this guide.

Coupon For The Original Greek Festival In Houston

Win A Trip To Caesar’s Palace In Las Vegas

Win a Trip to Universal Studios

Save up to 27% on Williamsburg Vacation Packages